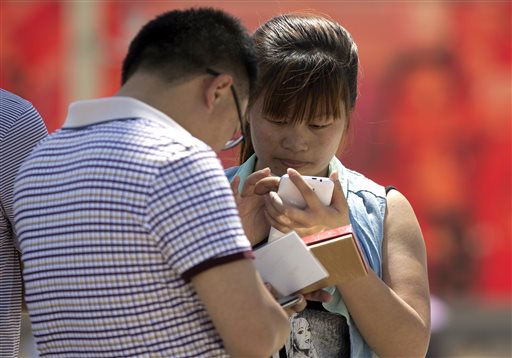 Chinese people use their smartphone on Tiananmen Square in Beijing, China Wednesday, May 28, 2014. China is targeting popular smartphone-based instant messaging services in a month-long campaign to crack down on the spreading of rumors and what it calls “hostile forces at home and abroad,” the latest move to restrict online freedom of expression. (AP Photo/Andy Wong)

BEIJING (AP) — China is targeting popular smartphone-based instant messaging services in a monthlong campaign to crack down on the spreading of rumors and what it calls infiltration of hostile forces, in the latest move restricting online freedom of expression.

Such services incorporate social media functions that allow users to post photos and updates to their friends, or follow the feeds of companies, social groups or celebrities, and — more worryingly for the government — intellectuals, journalists and activists who comment on politics, law and society. They also post news reports shunned by mainstream media.

Some accounts attract hundreds of thousands of followers.

The official Xinhua News Agency said the crackdown on people spreading rumors and information related to violence, terrorism and pornography started Tuesday and would target public accounts on services including WeChat, run by Tencent Holdings Ltd, which has surged in popularity in the last two years.

People can subscribe to feeds from public accounts without first exchanging greeting messages, as must be done with private ones, which typically link friends and acquaintances.

Tencent and other companies did not answer calls or immediately respond to emailed requests for comment.

Earlier this year, the ruling Communist Party announced the creation of an Internet security group led by President Xi Jinping. Observers say authorities are wary of millions of Chinese with Internet access getting ideas that might threaten the Communist Party system.

Noting that such services had become popular online communication channels, Xinhua said: “Some people have used them to distribute illegal and harmful information, seriously undermining public interests and order in cyberspace.”

“We will firmly fight against infiltration from hostile forces at home and abroad,” Xinhua quoted a statement from the Cabinet’s Internet Information Office as saying.

The timing of the crackdown suggests it may be a response to discussions about recent deadly attacks in China’s western region of Xinjiang, the U.S. indictment of five Chinese military officers for cyberspying, or the continuing government campaign against corruption.

“Anytime we see a tenser environment on fronts like those, there tends to be a corresponding clampdown on various communications tools,” he said.

The communist government encourages Internet use for education and business but operates an extensive monitoring system. Operators of social media are required to enforce censorship rules against material deemed subversive or obscene.

In March, WeChat removed at least 40 accounts with content about political, economic and legal issues.

Web-based microblogs, known in Chinese as “weibo,” once enjoyed explosive growth in China but have come under increasing pressure. A new legal interpretation allows the government to jail microbloggers who post false information that has been reposted 500 times or viewed 5,000 times.

From Beaches to Bangkok, Tourists Ask ‘What Coup?’