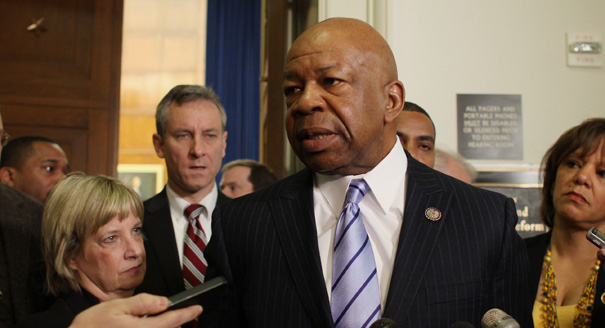 Rep. Elijah Cummings, D-Md., ranking member of the House Oversight and Government Reform Committee, talks with reporters on Capitol Hill in Washington, Wednesday, March 5, 2014, after former Internal Revenue Service (IRS) official Lois Lerner invoked her constitutional right not to incriminate herself and did not testify before the committee’s hearing on the targeting of tea party groups. (AP Photo/Lauren Victoria Burke)

(Politico) – Rep. Elijah Cummings, along with other members of the Congressional Black Caucus, sent a letter Monday to President Barack Obama, urging the administration to pursue changes to local law enforcement structure to “prevent more Fergusons,” including a federal czar to oversee local law enforcement.

In addition to the commission, the letter calls for the appointment of a federal czar within the Justice Department to monitor and oversee local police departments that receive federal funding.