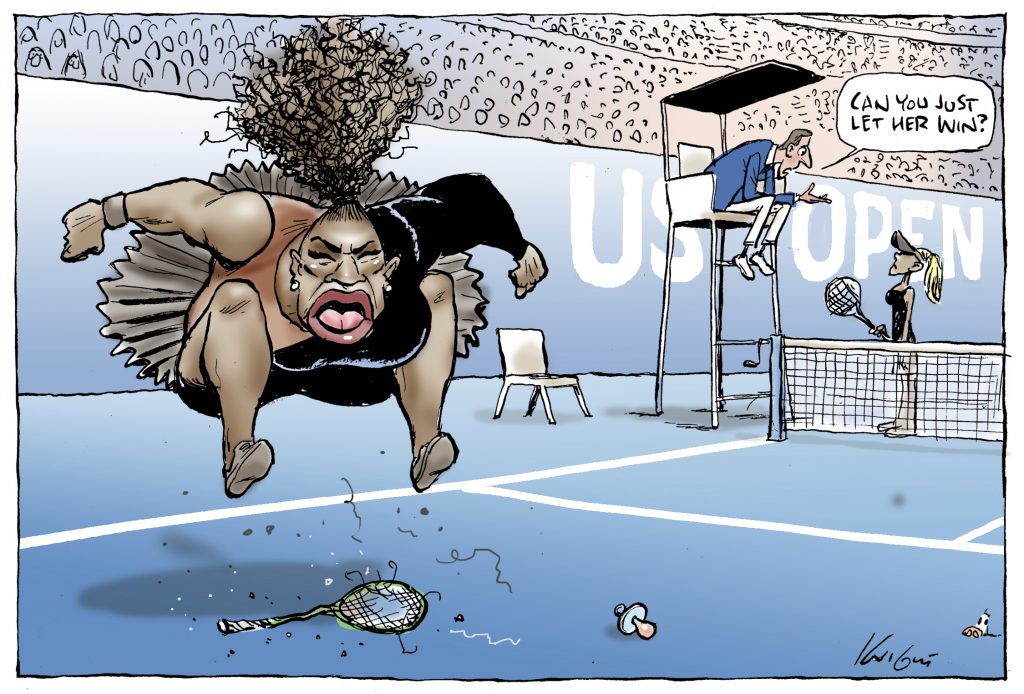 An Australian cartoonist has faced heavy criticism after depicting tennis superstar Serena Williams in what some have described as a racially offensive illustration.

Mark Knight, a cartoonist for the Herald Sun in Melbourne, Australia, published a caricature in the Sun’s paper Monday, portraying Williams as a large woman with fat red lips, jumping up and down on her tennis racquet in what appeared to be a parody of Williams throwing a temper tantrum because she was losing.

“This despicable cartoon tried and failed to diminish the greatness & grace of @serenawilliams,” Jackson tweeted. “Racism in any form is unacceptable.”

“Harry Potter” author JK Rowling said the cartoon was not only racist but sexist, too.

“Well done on reducing one of the greatest sportswomen alive to racist and sexist tropes and turning a second great sportswoman into a faceless prop,” Rowling tweeted.

But Knight said his drawing wasn’t meant to be racist and that it was inspired only by what he viewed as “poor behavior” displayed by Williams in the finals of the US Open this weekend. Serena had argued with chair umpire Carlos Ramos after being penalized for misconduct, and was seen on TV expressing how she felt that women are treated unfairly for competing with the same emotion and intensity as men.

The Sun backed Knight’s claim that his cartoon was not racist.

“A champion tennis player had a mega tantrum on the world stage, and Mark’s cartoon depicted that,” Sun editor Damon Johnston said, according to the Independent. “It had nothing to do with gender or race. This was about a bad sport being mocked.”

Now, reports are surfacing that tennis umpires are considering boycotting Williams, where they’ll refuse to officiate any of her games. According to former umpire Richard Ings, many of them believe that the umpire that Ramos didn’t receive proper support from the USTA.

“The umpiring fraternity is thoroughly disturbed at being abandoned by the WTA,” Ings told ESPN. “They are all fearful that they could be the next Ramos. They feel that no one has their back when they have to make unpopular calls.”

This article originally appeared in the AFRO-American.

"A Leak In The Building" Voice Of Atlanta (Greenleaf Season 3)