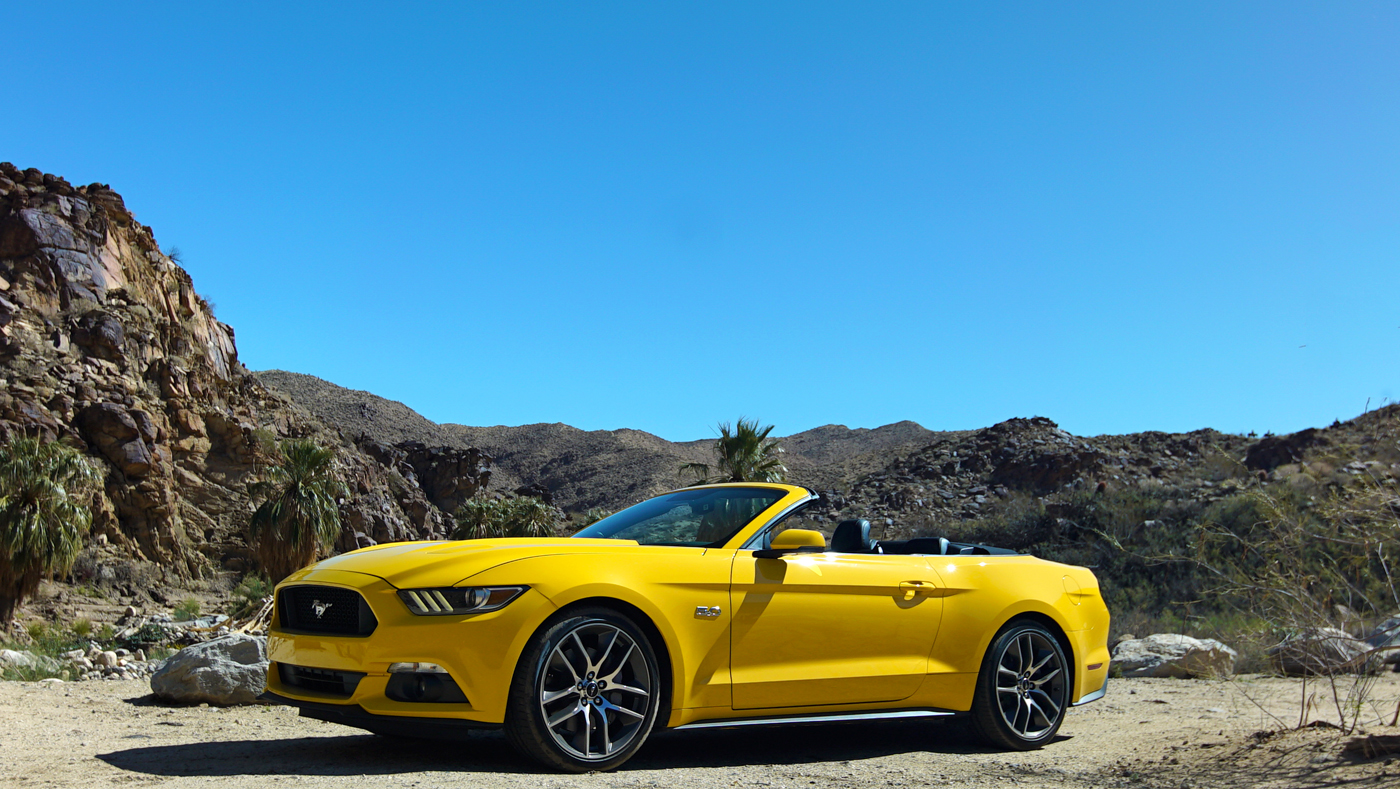 DETROIT – Although the new Mustang is just that – all new – it is unmistakably a Mustang. But it is contemporarily styled inside and out.

The hood is still long and the rear end remains more of a stump than a rump. Our 2015 Ford Mustang Convertible was lower and it had a wider stance with wider fenders and track. In other words, it was firmly planted on the pavement and stayed that way during aggressive driving.

Ford said the return of the Mustang fastback enabled a more steeply sloped windshield that was unaltered on our convertible. That convertible top was semi-automatic – it had to be manual unlatched before retracting into its compartment just behind the rear seats. In other words, the top did not intrude (too much) into the car’s trunk space. It only lost two cubic feet of cargo space.

The tri-bar tail lamps remained but they were updated. Not only were they LED bands of light, they flashed sequentially when the turn signal was initiated. The shark-bite front fascia and trapezoidal grille also remained.

Under the hood of our test car was the Mustang’s new 2.3 liter EcoBoost (read turbocharged) four-cylinder engine. Direct fuel injected with variable valve timing the engine made 310 horsepower and 320 pound-feet of torque at 2,500 to 4,500 rpms.

Mated to a six-speed automatic (a six-speed manual is available) our test car was awfully quick. But this engine led to our only quibble. It lacked the grunt of power that was common in past Mustangs, even the V6s. However, under aggressive acceleration we heard that purr of power from this potent engine. The downside is all the traffic citations that will follow in search of that sound. We think some engineering prowess to put a little more grunt in the exhaust of the Mustang’s 2.3-liter EcoBoost four-cylinder engine wouldn’t be a bad thing.

This engine got a respectable 20 mpg in the city, 30 mpg on the highway and 24 mpg combined.

The ride of our test car was smooth, the suspension soaked up the uneven pavement with hardly a thump. Cornering was great, braking was true and the car was really easy to drive. What’s more, though the Mustang had grown, it was still small compared to a midsize sedan yet did not drive or feel that way.

The Mustang has been outfitted with a double-ball-joint front MacPherson strut system that allowed for bigger brakes. In the rear was an all-new integral-link independent rear suspension. Ford said the geometry, springs, dampers and bushings all have been specifically modified and tuned for this high-performance application. New aluminum rear knuckles helped reduce unsprang mass for improved ride and handling.

Inside, we found the Mustang to be old school with lots of new twists. Instruments in front of the driver were analogue, much like before. On the left was odometer and on the right was the speedometer. They had a large TFT screen between them. Smaller oil pressure and boost gauges were embedded in the dash over the center stack. The template for the stack as well as the dash was made of a polymer that looked like carbon fiber or patterned aluminum. It gave the interior of our Mustang a refined sophisticated appearance.

And the controls were sophisticated, too. For instance, there were three ways to change the radio station: from the steering wheel, from the touch screen or from manual buttons just beneath the screen. We could change the steering feel from comfort or normal to sport. And we could change the drive mode from normal or sport to track or wet/snow. Although the changes in the Mustang’s exterior were evolutionary, the changes to equipment were a quantum leap.

Last year, the car celebrated its 50th anniversary and with this new rendition it seemed like the Mustang leapfrogged into the 21st century. It had a USB plug and 12 volt socket at the base of the center control screen and that was replicated inside the center console, plus Ford added an SD card slot.

The back seat of the Mustang looked great. Ford bills it as a four-passenger car. But the reality is the Mustang is really a 2+2, the back seats doing a better job of carrying a few grocery bags as opposed to people. In a crunch, somebody bigger than very small child could get in the back seats but how long they could stay there is a point of conjecture.

We didn’t get the chance but we suspect our Mustang would be as comfortable at the track as it was on city streets here. Indeed, the Mustang remains an everyday driver that has some speed, and depending on the engine, lots, of speed.

Post Views: 36
Related Topics:About That Caraboutthatcar.comfordFrank S. Washington
Up Next