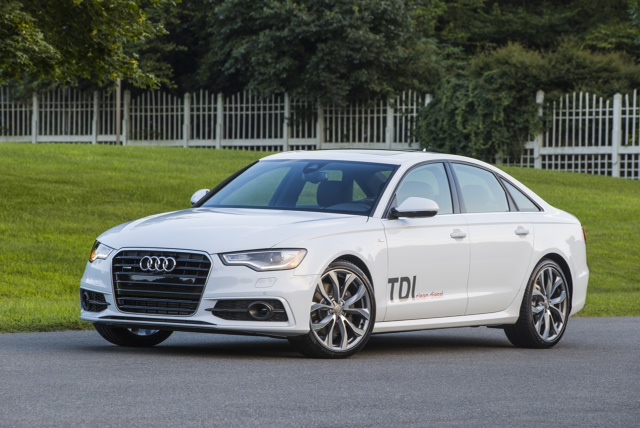 DETROIT – The only nuisance about the 2014 Audi A6 TDI is that the engine could stand a little better sound proofing. The same 3.0-liter six-cylinder turbocharged direct injection diesel engine powers the Audi Q5 and you can barely hear it.

In the A6, or at least the one we tested, the engine sounded a little wimpy. However, that thought went right out the window with a press on the accelerator. The A6 TDI’s engine made 240 horsepower and 428 pound-feet of torque at 1,750 RPMs. It could get from a standstill in a not at all shabby 5.5 seconds.

Mated to an eight-speed automatic transmission, the car had a top speed that was electronically governed to 130 mph. It also had an EPA fuel efficiency rating of 24 mpg in the city, 38 mpg on the highway and 29 mpg combined.

The tiptronic eight-speed gear box shifted imperceptibly. We didn’t bother much with the manual aspect of this transmission but the paddle shifter did work nicely.

Our test car was equipped with quattro, Audi’s all-wheel drive system. It is rear-wheel-biased but it can send torque to the wheel that has the most traction during slippery inclement weather.

However on dry pavement, quattro made the A6’s handling a lot crisper. Just the slightest turn of the wheel and the test car veered off in that direction much like a go-kart. Quattro rarely is credited with providing rifle shot handling to Audi vehicles equipped with it.

Of course, the A6 TDI had Audi’s single frame grille. For this model year, the black grille had a high gloss surround. The gloss black side window surround looked like there was no frame, just glass. The car looked sleek.

It was pretty slick inside too. The car’s Ash would veneer inlays looked natural. And Audi’s slide away information screen streamlined the car’s dash board when tucked out of sight. And though this car’s style was awfully slick, it was also a functional sedan.

The back seats were really comfortable. There was plenty of headroom as well as leg room. Though the A6 was listed as a five-passenger sedan, forget about it. Putting a third person in the back seat would make everybody back there uncomfortable.

At 14.1 cubic feet, the trunk had plenty of room too. The rear seat, a 40-60 split, will let down creating even more cargo space. But in a nod to its status as a luxury performance sedan, this A6 TDI was equipped with a four-zone climate control system.

We didn’t have much use for the former in mostly city driving but lane assist kept us from lackadaisical driving on the expressway and the top view camera assisted in avoiding nose bumps, tail taps and wheel scrapes on curbs while parking.

We had the A6 TDI Prestige model. In addition to the four-zone climate control system, the package included ambient lighting, cooled front seats, power folding side view mirrors that were heated and a power adjustable steering wheel.

The sport package was comprised of a sport tuned suspension and a multifunctional steering wheel with paddle shifters. The package’s 19-inch wheels were superseded by a set of 20-inch 10-spoke V design wheels.

Only 1 of President Obama’s Promise Zones is Majority Black

Why is Amazon Bullying Book Publishers?