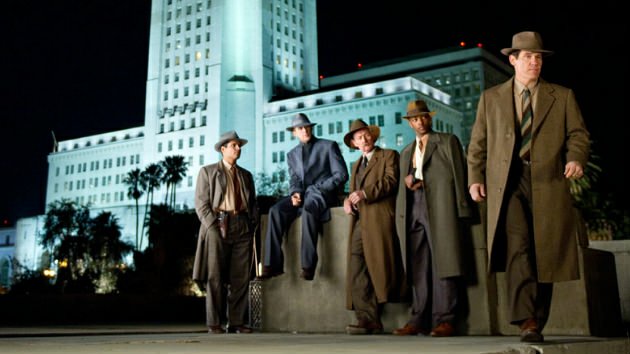 This is a poster for 2013’s “Gangster Squad,” which is taken in front of Los Angeles City Hall, where many scenes of the movie were filmed. The production of feature films in Los Angeles County has fallen by half since 1996, according to FilmL.A. Inc. (Courtesy of Warner Bros. Pictures)

(Los Angeles Times) – Moving to slow the exodus of filming to other states and countries, California lawmakers are poised to quadruple tax subsidies for location shooting to $400 million a year.

Legislation approved on a 5-0 vote by the Senate Appropriations Committee on Thursday also would eliminate a controversial system in which film and TV productions won tax credits based on a lottery system, regardless of the economic effect of the production.

The bill, AB 1839, must still be approved by the full Senate and signed by Gov. Jerry Brown. But legislative backers say they are confident the measure will clear all remaining hurdles, saying there is widespread recognition that California is losing one of its signature homegrown industries to other states.

Feature film production in Los Angeles County has fallen by half since 1996, and the region’s share of TV pilot production has fallen 73% since its peak in 2007, according to FilmL.A. Inc.

Martin Lawrence: ‘Bad Boys 3’ is in the Works