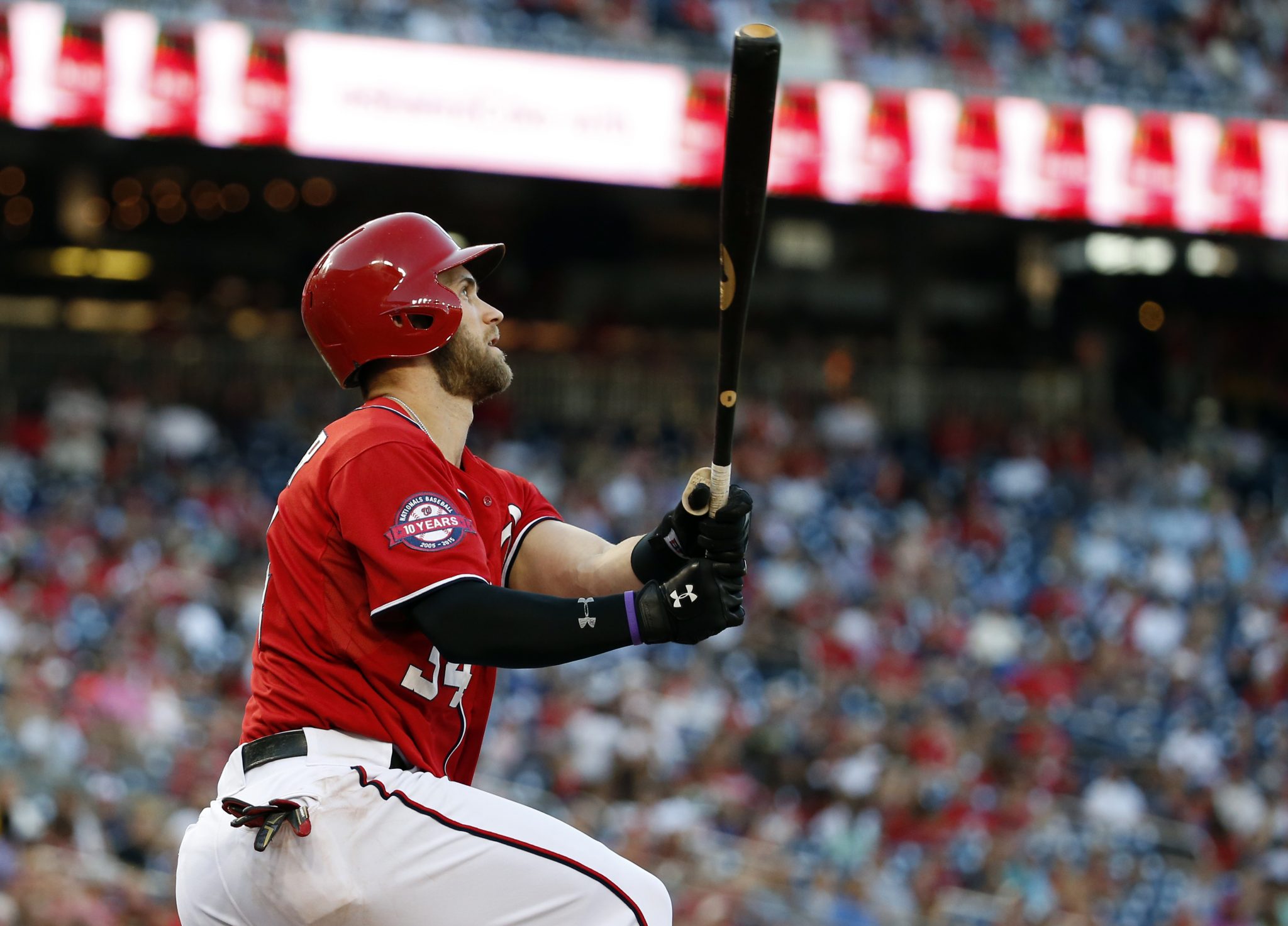 Washington Nationals’ Bryce Harper watches his two-run homer during the seventh inning of a baseball game against the Miami Marlins at Nationals Park, Saturday, Sept. 19, 2015, in Washington. The Nationals won 5-2. (AP Photo/Alex Brandon)

WASHINGTON (AP) — When Bryce Harper stepped to the plate in the first inning Saturday, a small group of Washington Nationals fans tried to get an “M-V-P!” chant going, with little success. Harper grounded into a double play.

When Harper came up in the fifth with the bases loaded, a similarly small contingent greeted him with that three-letter chorus. His sacrifice fly capped a 10-pitch at-bat, tying the game.

And after Harper added insurance in the seventh inning by tacking on the final runs of Washington’s 5-2 comeback victory over the Miami Marlins with his 41st homer — a no-doubt-about-it, two-run shot into the second deck in right field — it sounded as if nearly every throat in the announced crowd of 32,768 at Nationals Park was telling the world who deserves to be honored as the most valuable player in the NL.

“He’s been doing it all year,” said Nationals starter Jordan Zimmermann (13-8), who allowed two runs in the first and none the rest of the way in his six-inning, seven-strikeout outing. “He’s fun to watch. And anytime we can get some guys on base while he’s coming up, something good usually happens.”

As for whether Harper, still only 22, is the NL MVP?

“His numbers say he is,” Zimmermann said. “We’ll see at the end of the season, but I’m pulling for him.”

Harper leads the NL in homers, batting average (.340) and runs (113), and his three RBIs raised his total to 95, putting him 17 behind Colorado’s Nolan Arenado.

“Not really worried about the MVP or anything like that. I’ve said that numerous times. Just trying to win ballgames. And just trying to do everything I can to help this team win,” Harper said. “I definitely loved the support from the fans today.”

Coupled with the NL East-leading Mets’ 5-0 loss to the Yankees, Washington’s win moved it seven games out with 14 to play, giving it still only the faintest of hopes of making the playoffs.

“Just worry about ourselves and worry about us winning games,” Harper said. “If we don’t win, it don’t matter.”

Four relievers followed Zimmermann, with Jonathan Papelbon working around two singles in the ninth to earn his 24th save.

Run-scoring hits by Christian Yelich and Justin Bour put Miami up 2-0 in the first. The score remained that way until the bottom of the fifth, when Hand fell apart.

First, the lefty gave up Tyler Moore’s homer with one out, on a drive just to the left of straightaway center. Then, after allowing a single to Zimmermann, Hand lost any semblance of control, walking two batters to load the bases for Harper, whose deep sinking liner made it 2-all.

“That’s the evolution. That’s the evolution of his game. Grind at-bats. Bases loaded. The lefty-on-lefty matchup. Staying on balls. Doing what he can to put that ball in play,” Nationals manager Matt Williams said. “Those are the steps he’s made this year and will continue to make that will allow him to do the things he wants to do on the field. Pretty good at-bat.”

Two more walks by Hand, to Jayson Werth and Ian Desmond, forced in the go-ahead run, and Harper’s homer off Kyle Barraclough padded the lead.

“That was just a slider that ran right back into Harper’s swing,” Marlins manager Dan Jennings said. “He’s having that MVP-type season for a reason.”

Marlins: 3B Martin Prado had a black brace on his left wrist and sat out a second consecutive game.

Nationals: 1B Ryan Zimmerman missed his 11th game in a row with a side muscle injury. Moore started at first base.

Werth has reached base in a career-best 28 consecutive games. … Nationals 3B Yunel Escobar’s single in the first inning gave him 159 hits this season, a personal best.