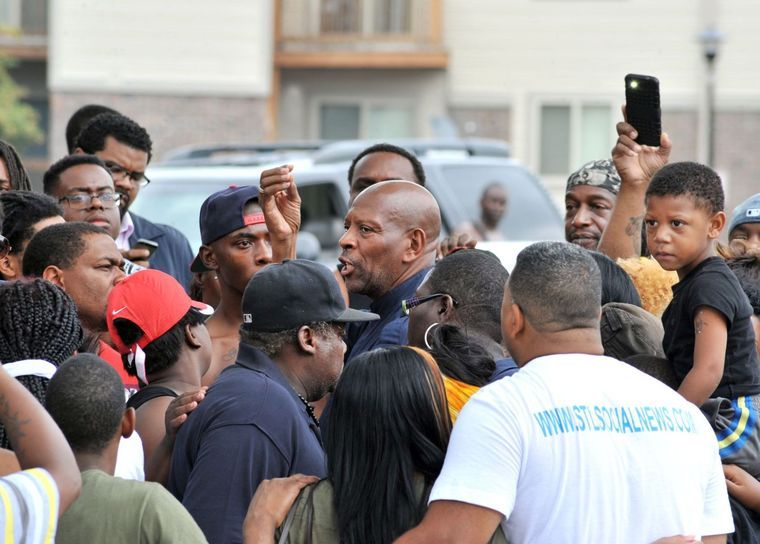 Brother Anthony Shahid in the thick of the protests at “ground zero” earlier this week. (Wiley Price/St. Louis American)

By Chris King
Special to the NNPA from the St. Louis American

Brother Anthony Shahid prevented far worse mayhem and perhaps bloodshed on the streets of Ferguson in the early days of the ongoing protests, according to Antonio French and other front-line leaders.

Shahid was able to gain the respect of many young black men who were spoiling for a fight – almost certainly to their death – with Ferguson and St. Louis County Police after County Police Chief Jon Belmar instituted SWAT-team tactics on peaceful protestors.

French – a city alderman who left his beloved 21st Ward in the City of St. Louis to help divert these youth from self-destruction – called Shahid a “hero.”

Shahid, who is not a young man, remains at the front lines after a change in police command (to the Missouri Highway Patrol, under the leadership of Captain Ron Johnson) and evolving police tactics. The police response moved to community policing after Johnson (a black man from Ferguson) was put in charge.

After Ferguson Police Chief Tom Jackson released a surveillance tape of a robbery, purportedly committed by Brown – but unrelated (Jackson said) to the events leading to Brown’s death – there was unrest on the streets again. This led Gov. Jay Nixon to declare a State of Emergency and a midnight-to-5 a.m. curfew in Ferguson that is now in its second day.

The outcome of the immediate protest struggle is unclear, but Shahid is already thinking of the mid- and long-term future of the youth he is trying to save.

“I want to go out on these streets,” Brother Shahid said, “and tell them, ‘Come on, brother, let’s go to work – to a job,” Shahid told The American.

Shahid called out large area employers that award billions of dollars in contracts, such as Metropolitan Sewer District and BJC HealthCare, to be more inclusive in their workforce hiring. Shahid is looking past the dramatics of street protest to gainful employment.

“We need job-training programs,” Shahid said. “We need to get these brothers off the street.”

A consistent response to the Ferguson protest movement against police brutality has been that African Americans only protest when a white person kills a black person. But Shahid has fought for decades to shape up young black men and discourage them from self-destruction.

Shahid knows that the black community, especially in the St. Louis region, has more political leverage than economic leverage. He very much intends to use that leverage. Using an expletive, he said, “I’m getting ready to [mess] with these politicians that aren’t there for these brothers.”

As the Ferguson protests went viral and came to dominate national news coverage, viewers across the nation and world have had a chance to see Shahid and his signature costumes and props.

Brother Shahid, as he is known in the community, has protested in Ferguson brandishing stuffed dogs, chains, a noose, a whip and wearing a black cloak and black police hat. He explained his choice of symbols.

“The dogs symbolize our doggedness as a people,” Shahid said. “The dog is man’s best friend, but they put the dogs on us.”

The chains: “I wear these chains to remind people we are still breaking the chains of slavery.”

The whip: “I carry the whip because they said, ‘If he hollers, let him go.’ They beat us until we hollered. Only then would they let us go.”

The noose: “I carry the noose because of what Billie Holiday sang, ‘Strange Fruit.’ They hung us from trees and left our bodies hanging there to rot on trees and intimidate other black people.'”

According to eyewitnesses, Ferguson Police left Brown’s corpse lying in plain sight on Canfield Drive for four hours in the middle of the day, surrounded by angry and grieving residents who became the protest movement’s hard core.

The black cloak: “I wear black because black is always the bad guy. I am trying to turn that around.”

Brother Shahid always mixes symbolism with direct action. He is calling for a direct action that is both a sort of funeral procession for Michael Brown and a slowdown – a warning showing the movement’s power to slow down traffic and business.

Shahid calls on protestors to drive at 40 mph with their flashers on at 7 a.m. (standard time) on Monday, Aug. 18.