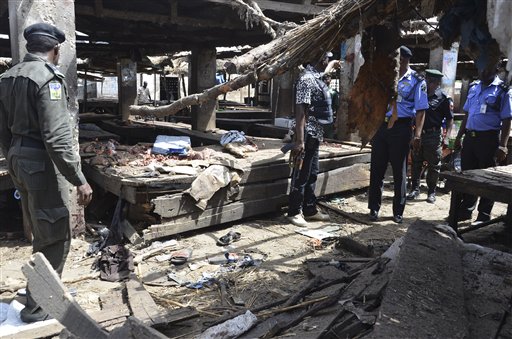 Police officers inspect the site of a suicide bomb attack at a market in Maiduguri , Nigeria, Tuesday, June 2, 2015. Boko Haram attacked the northeastern Nigerian city of Maiduguri on Tuesday with deafening explosions from the west and a suicide bombing near the center that witnesses said killed as many as 20 people. (AP Photo/Jossy Ola)

MAIDUGURI, Nigeria (AP) — Boko Haram once again attacked the northeast Nigerian city of Maiduguri on Tuesday, waking residents with deafening explosions in the early hours of the morning and then a suicide bombing that witnesses said killed as many as 20 people.

The extremist group which seeks to impose Islamic law across northern Nigeria has repeatedly attacked Maiduguri, the largest city in the northeast, since the newly elected president has designated it as the new headquarters in the war to curb the Islamic uprising.

“We are under siege,” Sumaila Ayuba, her voice shaking, told The Associated Press by telephone just after midnight from her home on the city’s western flank after her sleep was shattered by the explosions. “The shooting is quite deafening. Please, we need prayers.”

Hours later, a man blew himself up at Gamboru cattle market, the site of previous bombings, officials said. One witness said he counted at least 20 bodies. The National Emergency Management Agency said 10 people were killed and many others injured. The witness spoke on condition of anonymity for fear of reprisals.

Some onlookers began stoning the agency’s rescue workers, for unknown reasons. Soldiers fired into the air to disperse the crowd.

Over the weekend, more than 30 people died in another Boko Haram assault involving another suicide bombing and rocket-propelled grenades.

Also Tuesday, Boko Haram released a new video that allegedly shows militants shooting wounded Nigerian soldiers in the head and beheading a man in civilian clothes as well as charred parts claimed to be the remnants of a downed Nigerian jet fighter.

The video, the first released since it pledged allegiance to the Islamic State group, has no sign of longtime leader Abubakar Shekau, previously a mainstay of the group’s videos.

There was no explanation for his absence. Nigeria’s military has claimed many times to have killed Shekau — only to have him later resurface.

The video gloats over alleged disunity in the multinational force that in March announced it had driven Boko Haram from all towns and villages. Nigerian neighbors Chad and Niger have said the fight against Boko Haram would be long over if they had better cooperation from Nigeria.

President Muhammadu Buhari is traveling to Chad and Niger on Wednesday on his first official trip outside Nigeria, spokesman Garba Shehu said.

The uprising has killed some 13,000 people and driven 1.5 million from their homes.

Zyed and Bouna: The Unheard 10-Year Cry Against Police Violence in France