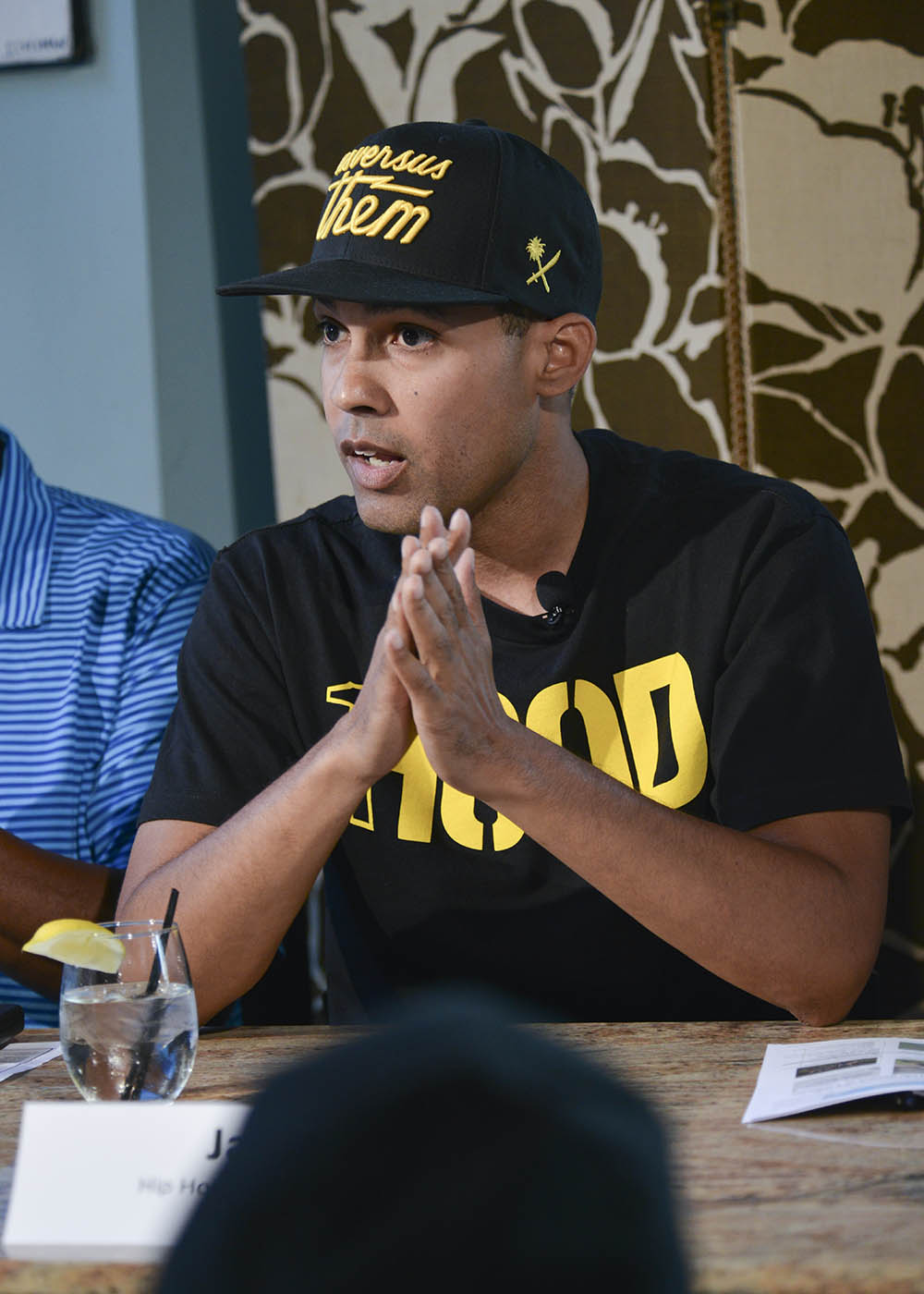 Jasiri X speaks during a panel discussion on Ferguson, Mo., and police brutality in the Black community in Washington, D.C. in August. (Freddie Allen/NNPA)

WASHINGTON (NNPA) –In the wake of the shooting death of Michael Brown, an unarmed Black teenager in Ferguson, Mo., members of the Black community and independent artists continue to call on mainstream rappers and entertainers to use their visibility to speak out against police brutality affecting young, Black males.

Nearly two months after Ferguson police officers left Brown’s lifeless body in the middle of the street for more than four hours, Ferguson residents continue to call for the arrest of Darren Wilson, the White police officer who shot Brown to death, following a brief altercation, where many eye witnesses said that Brown had his hands up, surrendering, as Wilson continued to fire on the teenager. In recent weeks, two Ferguson police officers have been shot at, one wounded, in separate incidents that law enforcement officials said were unrelated to the ongoing protests over Brown’s death.

Jasiri X, an internationally-known rapper, six-time Pittsburgh Hip-Hop Award winner, and community activist, said that the Black community should not only expect mainstream artists to get involved, but that Blacks should also put pressure on them to get involved.

“Most of these artists are young, Black men and they have probably experienced the same racism and police brutality themselves. So when we see something happen to somebody that is basically their peer, we should expect them to say something and get involved,” said Jasiri X. Even though the primary consumers of mainstream rap music are White males, Jasiri X said that artists still have to maintain ties to the Black community to stay relevant.

Jasiri X continued: “It’s young brothers like Michael Brown, like Trayvon Martin, like Jordan Davis that make them hot. You gotta come to the ‘hood for swag.”

Jasiri X said that the Blacks should give credit to artists such as T.I., The Game, Rick Ross, J. Cole, Nelly, Common, David Banner, and Killa Mike for lending their voices to the cause and “for those that didn’t we should ask them why.”

Kenneth “Mo Skillz” Jones, a local producer, songwriter and motivational speaker from East St. Louis, Ill., released a music video in September in an effort to raise awareness about police brutality and to encourage people to register to vote. The video depicts images of police using excessive force, including footage of a police officer toppling a man sitting in a wheelchair and dragging another man who was handcuffed by his feet. A video clip of Eric Garner on the ground gasping for breath as a Staten Island, N.Y. police officer chokes him to death is also featured. Earlier versions of the Skillz music video were also published to YouTube in August.

Skillz said that many Ferguson residents are still very upset and extremely focused on making a difference.

“And it’s not just the civil rights people,” said Skillz. “It’s also the younger generation as well. I’m not opposed to anyone that’s trying to help get the word out and to keep this alive so that we can actually make a difference to show them mankind is willing to stand against evil.”

Jasiri X, who rapped about mainstream artists being fearful of repercussions from coporate backers if they speak on social issues on a 2012 song titled, “Do We Need to Start a Riot?” expressed frustration that more artists didn’t speak up.

Jasiri X also noted that Jay-Z spoke about overcrowded prisons during a concert in California.

Jineea Butler, the founder of the Social Services of Hip Hop and the Hip Hop Union, a collective of nearly two dozen Hip-Hop organizations dedicated to promoting civil rights and economic empowerment, said that the Hip-hop community hasn’t done enough in Ferguson, Mo., following the shooting death of Michael Brown.

Butler said that because of how rappers today are handpicked to say nothing and do nothing, we can’t really depend on them to do too much, because they don’t understand the Civil Rights Movement.

Jasiri X said that rap music wasn’t more militant in the early 90s, corporations just hadn’t figured out how to monetize it yet.

When major record labels started pouring millions of dollars into the nascent genre, label executives started pushing certain images of Black men in favor of others, bisecting the genre into underground and mainstream, Jasiri X explained.

Butler argued that “back in the day” artists gained fame and notoriety for the content of their lyrics. Now she feels Hip-Hop is just being used for money.

Butler said that even positive songs from mainstream artists often have a hard time breaking through.

Skillz expressed concerns about how easy it is to promote negativity on the airwaves.

“We’ve been focused on things that don’t matter,” said Skillz. “We need to get more involved in what’s really going on in our communities, more than what we’ve done up until this point. I think its happening. You see a lot more youth a lot and more college students being involved in these protests.”

Skillz said that he wants to do free concert in major media markets such as Los Angeles and New York where they register people to vote and drive into their brains the importance of voting on November 4.

Even if you can’t protest in person, Skillz said, everyone can sign one of the petitions online at DontShootMovement.com. One of the petitions calls for prosecutorial reforms and designating the killing of unarmed Blacks by state and local law enforcement officials a hate crime.

“Ultimately, we need to have more of a community spirit,” said Jones. “We can make history by coming together, voting, petitioning and getting more involved in our communities.”

Butler said that Hip-Hop is definitely a part of the new civil rights movement and should play a major role in how Blacks affect change in their communities.

She added: “What everybody needs to know is that Hip-hop has the power, but it’s about who is going to lead and in which direction.”

LINK TO THE OFFICIAL MUSIC VIDEO FOR “HANDS UP DON’T SHOOT” BY MO SKILLZ ON YOUTUBE. 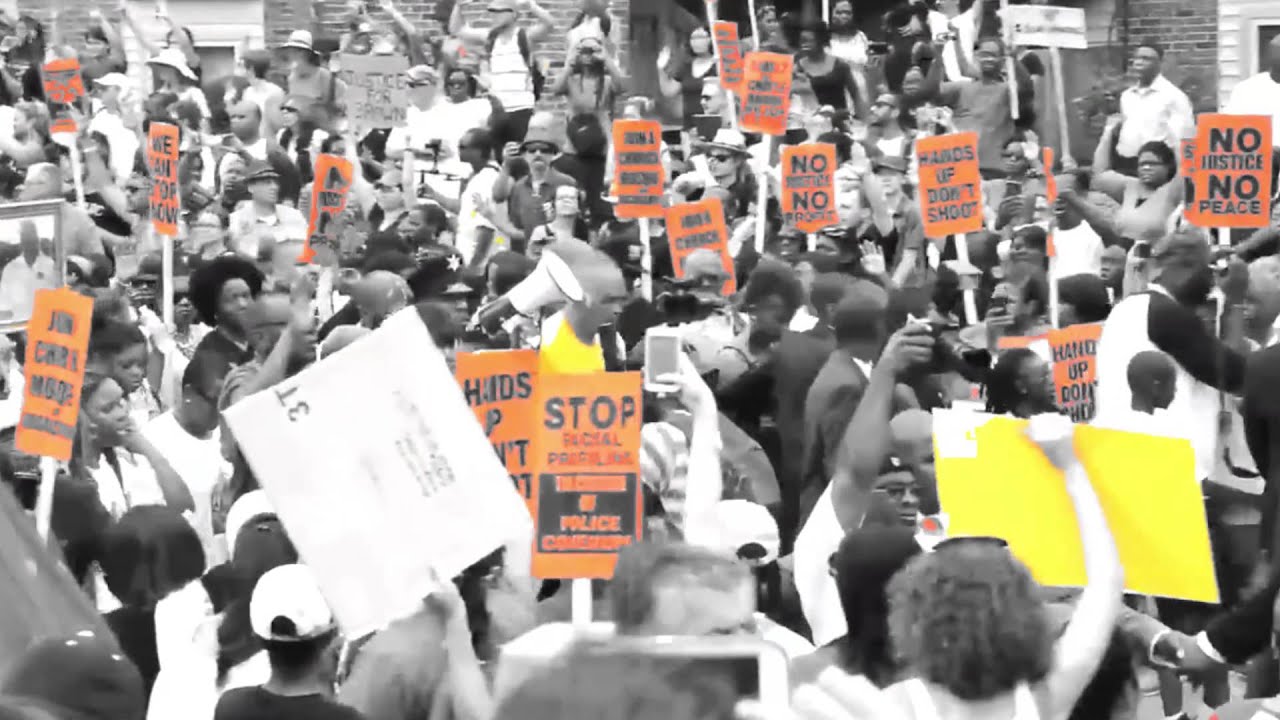 Film Review: I Am Ali