Black Lives Matter: How a Death in Ferguson Sparked a Movement in America
Advertisement 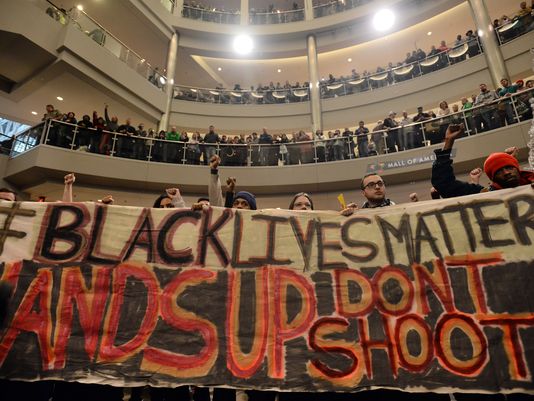 (CBS News) – One year ago, the nation watched as the city of Ferguson, Mo., erupted.

St. Louis police, dressed in riot gear, stood in a straight line, shields up and face masks down in a standoff with protestors. The media assembled on the sidelines, cameras poised to capture the latest. There was tear gas, burning buildings, chants and signs.

Protesters came armed with a message, a message that would echo through the Missouri night sky in the days and weeks after Michael Brown’s death. It was a message heard across the nation in more protests for other black Americans who died by police hands. “Black lives matter,” they chanted, wrote and tweeted. “Black lives matter,” they chanted in throngs that blocked streets and demanded America’s attention.

While demonstrators took to the streets of Ferguson and cities like New York and Los Angeles, a new generation of activists gathered both on the ground and online. The Black Lives Matter movement called for change with how police deal with minorities, and demanded a look at systemic racism and equity. And from it emerged a group of young people paving the way.

A Year After Michael Brown’s Death, Ferguson Has Changed

Ferguson: The Other Young Black Lives Laid to Rest in Michael Brown’s Cemetery