Black Lives Matter: Coming to a Museum Near You?
Advertisement 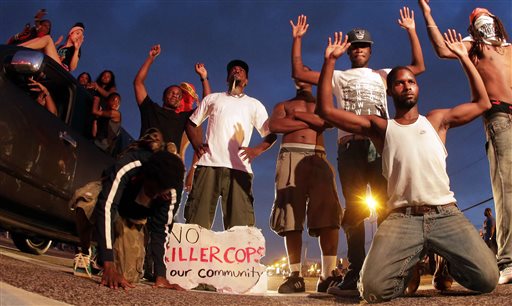 The National Museum of African American History and Culture in Washington, D.C. is set to open in fall 2016. (John Sonderman/CC BY-NC 2.0)

WASHINGTON (NPR) — As we approach the one-year anniversary of unarmed black youth Michael Brown’s death at the hands of Ferguson, Mo., police officer Darren Wilson, the National Museum of African American History and Culture, which is set to open next fall in Washington, D.C., has already started collecting banners and posters from the Ferguson protests, as well as gas masks donned by protesters and cell phone videos taken at the various demonstrations.

NPR’s Scott Simon spoke with the museum’s director, Lonnie Bunch, about why he decided to start gathering items from the Ferguson protests and the subsequent Black Lives Matter movement.
INTERVIEW HIGHLIGHTS

On why Bunch decided to start collecting items from the protests:

One of the jobs of a museum is to not only look back, but to look forward. And so once I heard about [the demonstrations] I knew it was very important to make sure that we collected material that might help a curator 20 years from now or 50 years from now look back and tell the story of the changing notions of race in America.