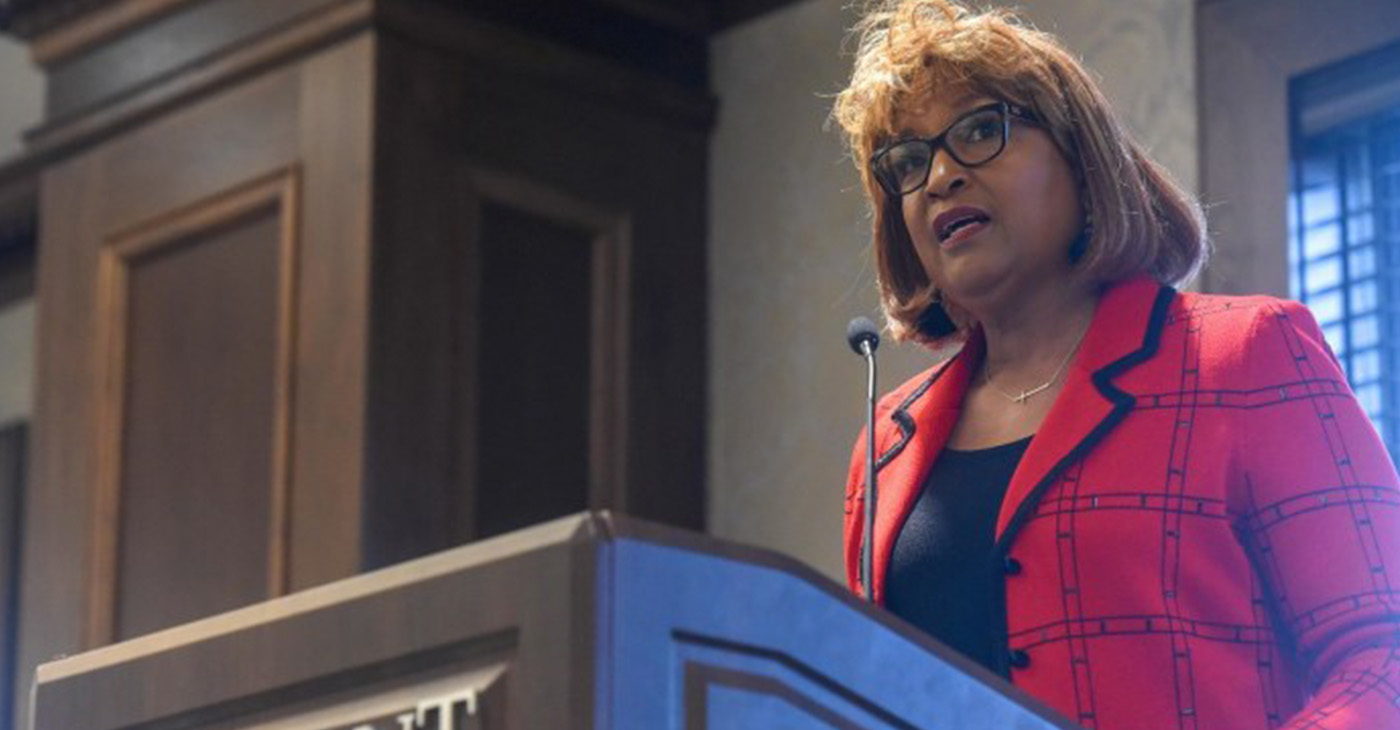 Bishop Vashti Murphy McKenzie, the 117th elected and consecrated bishop of the African Methodist Episcopal Church and the first woman to serve in the role, spoke to a packed crowd on January 18 as she delivered Belmont’s MLK Week Celebration keynote address in the Janet Ayers Academic Center Conference Room.

The event began with remarks from Metro Nashville Mayor David Briley, including a proclamation from the city officially welcoming McKenzie to Nashville. Director for Athletics Media Relations Kenisha Rhone introduced the Bishop, noting her recognition by the Huffington Post last year as one of 50 Most Powerful Religious Women in the World.

McKenzie began her address with a simple question: “When was the last time you took a stand for something,” she said. “For anything? For some cause greater than yourself.” Detailing the importance of finding and understanding our own convictions, principles and beliefs, McKenzie wondered if its our fears and our desire to hold onto earthly accolades that keep us from taking action against the causes that are put on our hearts.

Quoting ‘To Every Man There Openeth,’ a hymn written by John Oxenham, McKenzie described the ‘misty flats’ we often find ourselves traveling: the times in our lives between the highs and lows where we might become too comfortable, complacent even.

These ‘misty flats’ can be dangerous, she said, like “the ‘misty flats’ where having people speak well of us means more than our convictions. Where uncivil discourse is easier than real conversation, no one appreciates a person who tries to stand on both sides at the same time.”

So instead, we find the areas we are being called to stand for—and we fight. Likening David’s fight against Goliath to Dr. King, Jr.’s fight for civil rights throughout his life, McKenzie highlighted commonality among the two men: a sense of audacity to step in when necessary. “It wasn’t [David’s] fault, but it became his fight,” she said. “It wasn’t [Martin’s] case, but it became his call. When you take a stand, you don’t have to go looking for the fight. The fight will find you.”

“We might not have been there when it happened,” she said, motivating listeners to forgo unnecessary conversations surrounding whether or not they witnessed the wrongdoing they are called to combat. “But now it’s our fight.”

“Audacity is believing you have something to offer than no one has yet given,” she said. “Look past your perceived disadvantages and make them work for you. David did. Martin did. Martin was audacious enough to step into the fight that wasn’t his fault and became his fight, and everything changed forever.”

But her time with attendees didn’t end there, She went on focus on the importance of each listener, highlighting the way God has called each for a unique purpose: a unique fight. “God wasn’t looking for anybody. God was looking for you,” she said. “You are the one that is needed for such as time as this, when God has opened the door for you, how dare you close it in the face of someone else?”

Ending the way she began, Bishop McKenzie’s closing words were clear. “So,” she said. “Who will take a stand?”

This article originally appeared in the Nashville Pride.

Remembering the legacy of the Martin Luther King Jr. Center