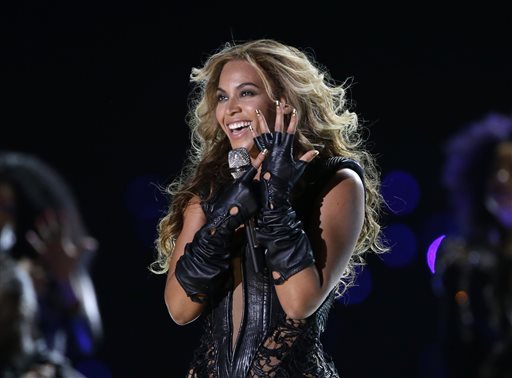 In this Feb. 3, 2013 file photo, Beyonce performs during the halftime show of the NFL Super Bowl XLVII football game between the San Francisco 49ers and the Baltimore Ravens, in New Orleans. (AP Photo/Mark Humphrey, File)

(Ace Showbiz) – Beyonce’ Knowles tops this year’s list of Celebrity 100 by Forbes. The “Single Ladies” singer knocks Oprah Winfrey out of the first place this year as the media mogul sits at No. 4. The second place is taken by LeBron James, while Dr. Dre takes the third spot. Ellen DeGeneres rounds out the top five.

The magazine compiles the list based on fame and money. The ranks are decided after they obtained info regarding stars’ estimated income from entertainment-related activities from June 1, 2013 to June 1 2014 by talking to lawyers, producers, agents and other people in the entertainment industry. The celebrities’ fame, meanwhile, was measured by social media power and how many times each star was mentioned in printed media, on TV and radio.

During the period, the former Destiny’s Child member cashed in an estimated $115 million. She gained success with her tour which raked in $2.4 million per stop, according to Pollstar.

Memorial Service for Ruby Dee Will Be Held in September