On June 26, humble community servant Michael Lynch and his family were honored in a surprise ceremony during Crenshaw Christian Center’s Sunday service — marking the winning coach’s 26-year career, retirement, and upcoming induction into the California Interscholastic Federation (CIF) Hall of Fame. Lynch was under the impression that he and his family were attending a final service before relocating to the Atlanta area.

This original Compton son, 27-year Inglewood resident, and 33-year member of Crenshaw Christian Center led Price High and LaSalle High teams, 19 and seven years, respectively, to 626 wins. Lynch also led young players to eight consecutive (CIF) titles, 10 Southern Section championships and eight state championships. He is a five-time CIF Coach of the Year and State Coach of the Year, who has sent multiple players to Division 1 schools, including 36 who went on to play in college and the pros.

Lynch credits this track record of success to his lifelong love for the game of basketball, the faith-focused teachings of Apostle Frederick K.C. Price and Frederick K. Price Jr., its application, and a sincere desire to help young men and women navigate life and reach their dreams on and off the court. 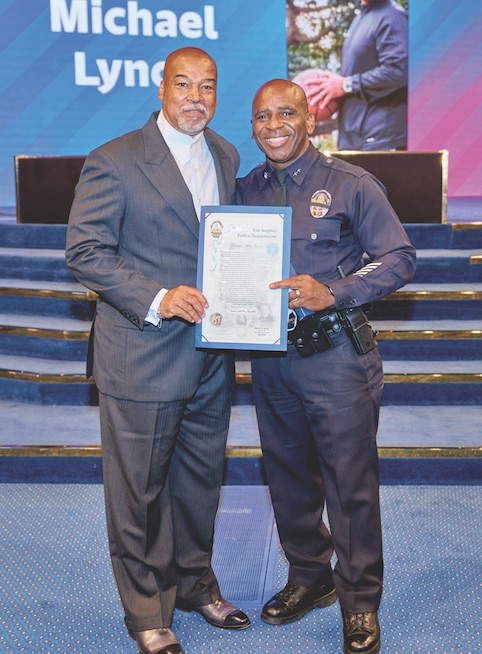 With solid support from his wife, Becky, and their children, Lynch has fueled the careers of scores of native sons and daughters who have gone on to become doctors, entrepreneurs, business owners, educators, athletic directors, husbands, wives, fathers, and mothers — all shaped by the strong example set by the Lynch family. They have each served as mentors, father and mother figures, loving brother and sisters, counselors, and caring disciplinarians to many, and have sacrificed to bridge need gaps to propel others forward.

At Sunday’s ceremony, CIF Southern Section Commissioner of Athletics, Rob Wigod, announced news of the board’s unanimous decision to grant Coach Michael Lynch Hall of Fame status. He congratulated Lynch and recognized his outstanding contributions to CIF Southern Section athletics, which is to be celebrated at an October 12, 2022, awards luncheon. This designation also comes with an esteemed Gold Life Pass.

Also, on hand as a special guest was Los Angeles Police Department (LAPD) Deputy Chief for the South Bureau, Gerald Woodyard, who presented a commendation on behalf of Chief Michel Moore, who entered the academy with Lynch in 1985. Lynch was recognized for his 15 years of service to residents as an officer and detective before he departed to become coach and athletic director of Price High, and head of security for Crenshaw Christian Center. While with LAPD, he loved diverting individuals to alternate life pathways while working in patrol, narcotics, gang intervention and juvenile restoration. He also coached the department’s basketball team. “You mentored me by your example, and I am grateful,” lamented Deputy Chief Woodyard. He continued, “your efforts resulted in young people staying out of trouble, which is our shared community-wide goal.” 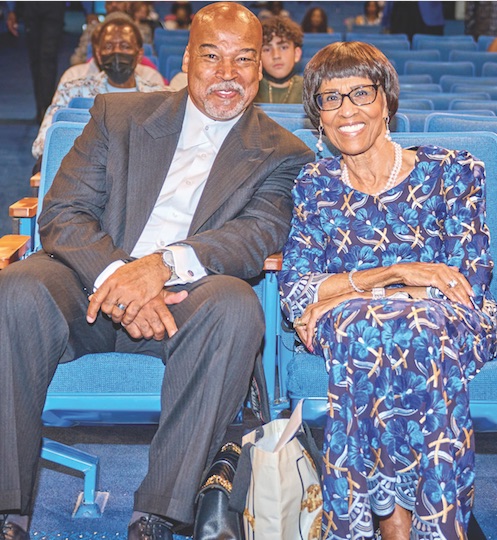 Pastor Frederick K. Price remarked about a coach being someone who offers wise counsel, and how through the years, he has personally appreciated Coach Lynch’s counsel to him as the second man in addition to his father, Apostle Price, whom he regards to possess impeccable character and integrity.

Angela Evans, President, and CEO of Crenshaw Christian Center coordinated this surprise effort to give Lynch flowers while he is alive encouraged by Colossians 2:6-7. “The ministry honors Coach Michael Lynch because of what he means to our church body, to our school, and to coaches and young men and women throughout our city and beyond. He is one of our own, as well as a stalwart member of the community, and we are immensely proud of him. It is our great pleasure to celebrate him on his retirement per Proverbs 3:27, ‘Do not withhold good from those who deserve it, when it is in your power to act.’”

Heartfelt commendations were also provided by the offices of Congresswoman Maxine Waters, Supervisor Holly Mitchell and City of Inglewood Mayor, James Butts and presented to Lynch by Angela Evans and Pastor Price.

Throughout his coaching career, Lynch has always told people that they can do whatever they have faith for — and served as their living example — buoyed by many other coaches, staff, volunteers, and supporters through the years. He was moved by the outpouring of love and gives God all the glory for what He has done in and through him. “Thank you! I am so very humbled and honored,” Lynch extolled to congregates and guests. He is looking forward to raising up new generations of coaches, leaders, and young people through his established nonprofit, “A Coach Is.” Learn more at acoachis.org.