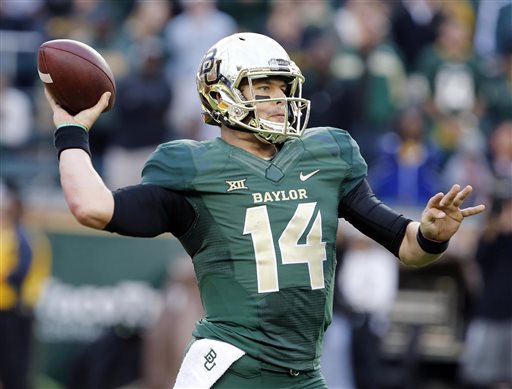 (AP)—The age of high-powered offenses continues to drive college football this season, with no end — or limit — in sight to how high the points can go.

Nowhere was the scoring fun more in focus this weekend than Baylor’s 61-58 win over TCU on Saturday.

The Bears, led by Bryce Petty’s national best of 510 yard passing for the week, rallied from 21 points down to hand the Horned Frogs their first loss of the season. Following the dramatic win, Baylor continues to lead the country with an average of 52.7 points per game, while TCU is third at 45.8.

The two teams combined to gain 1,267 yards in the game, which was the second-highest scoring affair between two ranked teams. Baylor was also involved in the highest scoring one, a 70-63 loss to West Virginia in 2012.

While the two Big 12 Conference teams put on an offensive show for the rest of the country to enjoy the truth is high-scoring games like Saturday’s shootout are becoming more and more commonplace.

Nationally, Football Bowl Subdivision teams are averaging 30.3 points per game this season. That’s up from 27.1 points per game in 2009 and 29.5 last year, with Spread offenses and stricter defensive rules contributing to the steady rise.

The Big 12 is third at 34.1, though Baylor and TCU are likely to push that upward with their continued assaults on opposing defenses.

Some other notable statistics from the weekend:

RUNNING RAWLS: Central Michigan senior Thomas Rawls had the top rushing performance of the week, rushing 40 times for 270 yards as the Chippewas shocked Mid-American Conference power Northern Illinois in a 34-17 win. The win snapped a national-best 28-game home winning streak for the Huskies, who had also won 24 regular season conference games in a row before Saturday.

KICKING ACC: Led by Florida State kicker Roberto Aguayo, the Atlantic Coast Conference is the home to some of the best field-goal kickers around this season. Aguayo is 13 of 13 on field goal attempts this season to lead the country, but he’s far from alone — with four of the top five kickers all from the ACC. Pittsburgh’s Chris Blewitt, Duke’s Ross Martin and Wake Forest’s Mike Weaver are all also perfect on field goals this season and rank third through fifth nationally. Ironically, the second-best kicker so far — Brad Craddock — plays for Maryland, which left the ACC for the Big Ten this year.

EASY PICKING: Louisville had a pair of interceptions in a 23-17 loss to Clemson on Saturday, and surprisingly neither came from safety Gerod Holliman. The sophomore leads the nation with seven interceptions in seven games this season, including a pair of games — against Virginia and Florida International — with two each.

POINTS A PLENTY: Three of the top quarterbacks in the country continue to play the most important role for their teams this season. Washington State’s Connor Halliday, who threw for a Division I-record 734 yards last week, leads the country by being responsible for 24 points per game for the Cougars — thanks to his 28 touchdown passes. Meanwhile, Heisman Trophy hopefuls Marcus Mariota of Oregon and Dak Prescott of Mississippi State are second with an average of 23 points per game each.
Copyright 2014 The Associated Press. All rights reserved. This material may not be published, broadcast, rewritten or redistributed.