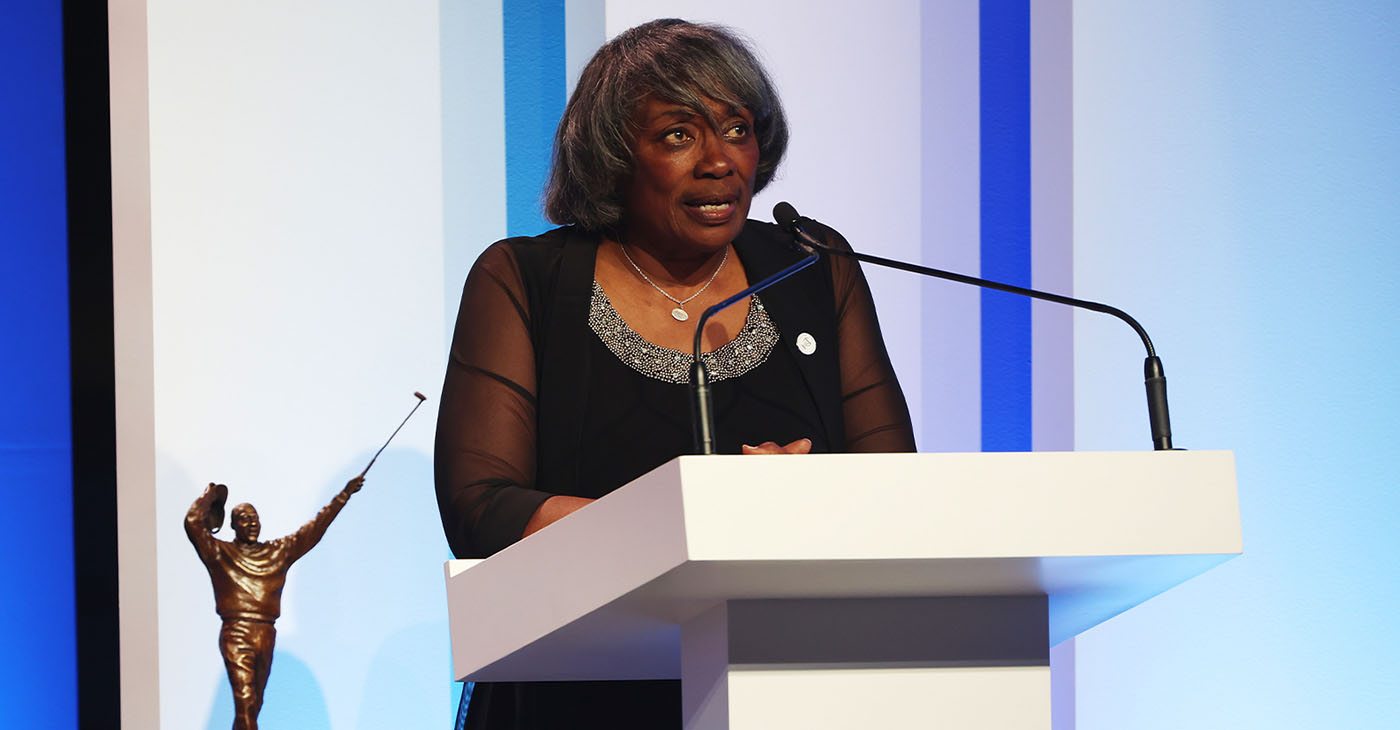 But the elements did little to spoil a week that not only showcases the best golf players in the world but the unmistakable efforts by the PGA TOUR to display the many ways the game has embraced diversity, equity, and inclusion.

They participated in a sports and education forum at Sawgrass Marriott.

The event included enthusiastic members of the PGA TOUR’s ‘CORE’ employee resource group, which promotes and highlights diversity in the PGA TOUR culture.

It spotlighted the wide variety of career opportunities in golf and sport and included a “Beyond the Sport” panel that featured alumni of the PGA TOUR’s minority internship program.

While Tiger Woods and his daughter Sam captivated the crowd during the iconic golfer’s World Golf Hall of Fame induction ceremony, Renee Powell earned honors as the inaugural recipient of the Charlie Sifford Award.

Sifford, for whom Woods named his son Charlie after, broke the color barrier in 1959 when he became the first Black player to participate on the PGA TOUR.

Powell, who in 1967 became the second African American woman to compete on the LPGA Tour, recalled Sifford and her father, William’s influence.

“It was as a child of 12 that I first saw Charlie when we were competitors in the old UGA National Tournament, he in the pro division and me in the girls’ junior division,” Powell said during the ceremony.

“I was sitting in the audience 17 years ago, along with my dad, and listening and crying as Charlie made his acceptance speech, and it was simply from the heart.”

“Charlie was on a walker and not in the best of health when he and Charles Jr. arrived and walked up the steps of the church at my dad’s funeral on a very cold winter day in 2010. Five years later, I spoke at his funeral in Cleveland.”

Powell recalled the lessons she learned from her parents and brothers, who taught her how to overcome unfair barriers.

“And if Charlie would not have made the sacrifice to break barriers in joining the PGA, there would not be this Charlie Sifford Award,” Powell exclaimed.

She concluded that Sifford and her father loved golf so much that each was willing to “make incredible sacrifices to create opportunities for all to play our sport.”

“So, our sport really can only remain healthy when we are indeed diverse and inclusive of all people,” Powell said.

One of four Black golfers on the PGA TOUR, Joseph Bramlett, counted among the first timers at THE PLAYERS.

“I’ve dreamed of playing this tournament for a very long time,” Bramlett told NNPA Newswire. “It’s taking a lot of time, I’ve had a few injuries and some tough moments, but here we are still going.”

While Bramlett’s first time playing at THE PLAYERS may have been different from the dozens of minorities participating in the various PGA TOUR sponsored events during the week, it certainly didn’t surpass the experience they soaked in.

“It’s unusual to be able to say that I’m on the same course with Jordan Spieth and Tony Finau,” Manyi asserted.

“Quite of few of them have also been a part of First Tee and being able to meet those people and look up to them – like I can aspire to that, and maybe I won’t play professional golf, but I can be that successful and confident.”

The Forward Times in Houston: Carrying Forth a Special Vision