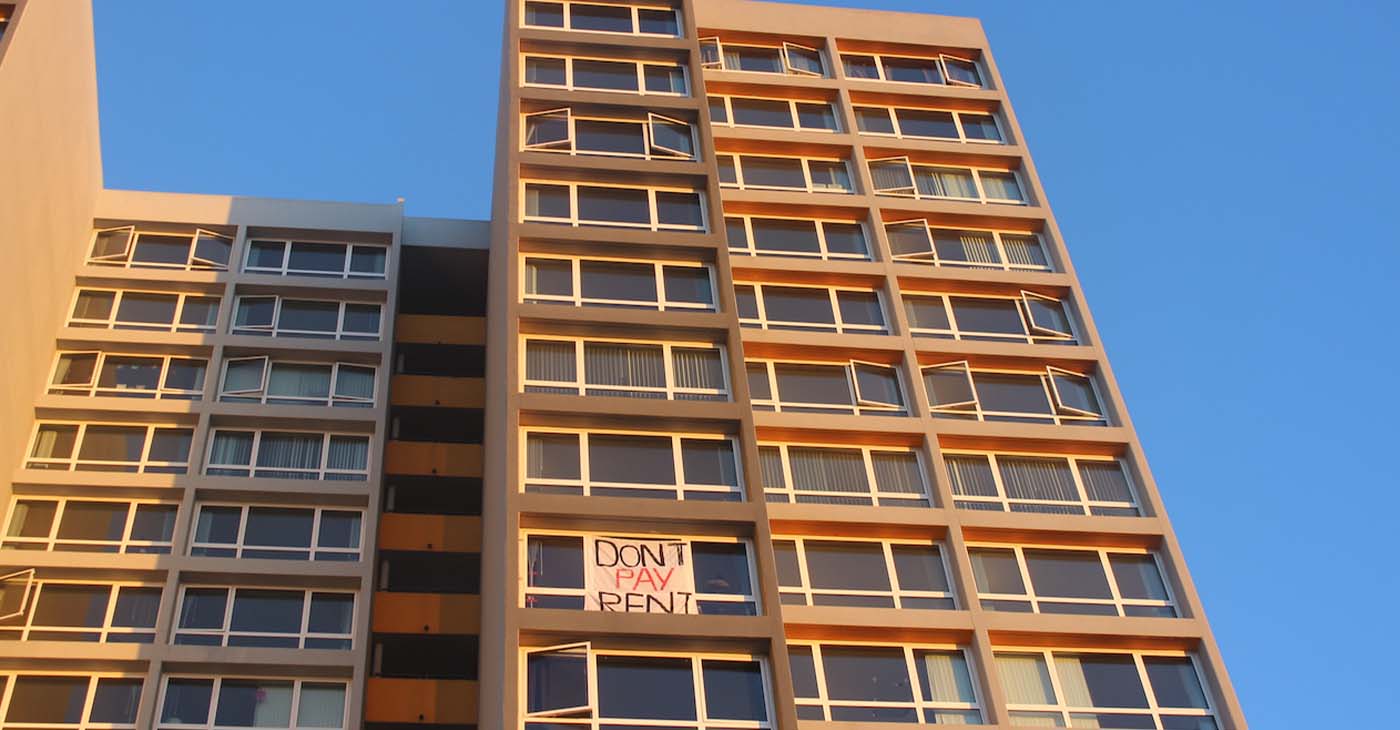 Since tenants living in the ReNew on Merritt building on 1130 3rd Ave. in Oakland started collectively withholding rent, management has hired armed guards. Rent-striking tenants say they are facing “harassment,” while management has said they hired the armed guards due to “threats” from tenants.

Alexandra ‘Ali’ Uro-May and Cassandra Chavez, who both live in the 18-floor complex, see management’s decision to hire armed guards as unnecessary retaliation.

“They are trying to use an intimidation tactic,” said Chavez. “All they want is rent and they aren’t worried about the problems here.”

Uro-May and Chavez are part of the ReNew on Merritt Tenant Council, a group of tenants living in over 40 of the buildings’ 178 apartments who started a rent strike on September 1. They’re seeking to collectively pressure FPA Multifamily, the building’s owner, and Trinity Property Consultants, the building’s property management company, to resolve habitability and safety issues at the site.

The issues, which are documented in over a dozen complaints to the City of Oakland since May 31, include black mold, backed up sewage, broken down elevators, and electrical problems. Tenants also complain of fire alarms going off erratically, problems with mail including stolen packages, and widespread rat and mice infestation. In June, Alameda County Vector Control released a report confirming “evidence of rodent activity” at the building. (Chavez said she recently found a dead mouse outside her door.)

No one from FPA Multifamily or Trinity Property Consultants has responded to multiple calls and emails requesting comments for this article. But the site’s management, which works for Trinity Property Consultants, wrote emails to the buildings’ residents in late September saying that they intended to address some of the buildings’ issues, that they had faced “threats to our team members’ safety,” and that they had “hired an armed service” to “protect our staff.” The email also stated a resident had been arrested on Sepember 21 in the building.

According to Oakland Police Department Public Information Officer Candace Keas, “an individual was detained” on September 21 at 1130 3rd Ave. after a manager called the police on a resident, but records “do not note…what the individual was arrested for.”

Chavez said her partner did not want to comment for this article. According to Chavez, a manager accused her partner of making threats during an argument between him and staff members about an incident where Chavez says a manager was bothering her about unpaid rent in the entryway of the building and in front of her children, which left her feeling “embarrassed, shocked and disrespected.”

“[My partner] was very upset,” said Chavez. “So, he went to have a conversation to say ‘please, don’t harass.’”

Then the next day, Chavez and her partner were served with a three-day eviction notice which accused them of violating their lease due to the altercation and arrest.

“Our hearts just dropped,” Chavez said about receiving the notice. “We have kids, and we didn’t have anywhere to go.”

Chavez and her family have been challenging the eviction, and at this point, they are still living in their apartment.

On September 23, the ReNew on Merritt Tenant Council sent a cease-and-desist letter to FPA Multifamily and Trinity Property Consultants “to demand an immediate end to retaliatory harassment of tenants and the retraction of the notice of eviction” for Chavez and her family’s apartment.

The council criticized the companies for “silence” and “denial” about tenant requests for them to resolve “ongoing safety and maintenance issues” and hiring “armed guards in tactical gear” who they accused of “aggressively” knocking on tenants’ doors “demanding entry to their units.”

A video Uro-May sent this reporter showed a security guard onsite identifying himself as working for Off-Duty Officers, Inc. The company’s director of operations and marketing manager did not respond to calls and emails requesting comments for this article.

Many of the habitability and safety issues that tenants are concerned with arose before FPA Multifamily bought the building, and brought in Trinity Property Consultants to manage it, in late August.

In an email to residents from late September, management said they were working on an “elevator modernization project that will be scheduled in the near future,” attempting to fix fire alarm issues, and had attempted to do unit inspections to look for “rodents, water intrusion and other deficiencies.”

Armed guards accompanied staff during these onsite inspections, which made some tenants uncomfortable.

Joie Seldon, who’s lived in the building for nine years and is a member of the council, called the presence of armed guards during the inspections “completely ridiculous, aggressive, and inappropriate on so many levels.”

In their email, management also wrote that the “tenant council” had “blocked and harassed our team in the hallway” while they were trying to do unit inspections, which prevented them from addressing some of the issues tenants are requesting that they resolve.

Uro-May said the tenants were witnessing and documenting staff and an armed guard as they inspected units but were not blocking entry. The video Uro-May sent this reporter showed tenants questioning the guard about the notice they were given about mandatory inspections and objecting to staff entering certain units that had signs reading “do not enter” displayed on doors.

The recording shows the guard admitting staff had entered despite the signs but saying that doing so was legal.

California state law allows a landlord to enter a unit during normal business hours for such inspections if they give at least a 24-hour notice, except in the case of an emergency. An email shows management contacted tenants on September 20 around 4:00 p.m. and announced “mandatory inspections” related to “pest control” and “maintenance” would start the next day at 9:00 a.m., leaving about 17 hours of notice.

Seldon said she wanted the inspections to happen but objected to how management scheduled and enforced them.

“That they wanted to do it was appropriate,” she said. “But how they did it was inappropriate. The fact that they said you could not reschedule made some people anxious.”

Uro-May said problems are persisting in the building. During a visit to the building, this reporter heard the fire alarm go off when there was no fire, which Uro-May said happens several times a day.

Chavez said mail problems persist and that “nobody can get into the mailroom now,” as management cut off access to it on October 10. This reporter found the door to the mailroom bolted shut on October 18. A note from management stated that “the mailroom was vandalized” and instructed tenants to “pick up your mail directly at the post office until our new mailboxes have been received and installed.” Amazon packages sat on the floor of the building’s entryway.

In an email from September 21 to residents, management wrote that “due to the ongoing threats to our team members’ personal safety, our office staff will work from an alternate location.” Uro-May and Chavez said that while management is gone, they still are occasionally seeing armed guards in and near the building.

ReNew on Merritt Tenant Council members are still withholding their rent, and asking to meet collectively with FPA Multifamily, and Trinity Property Consultants, to discuss how their demands can be met so the rent strike can end.

“Now more than ever we feel like we have to keep pushing because they cannot treat us like this,” said Uro-May.

Here’s What to Ask When Saving for the Unexpected..