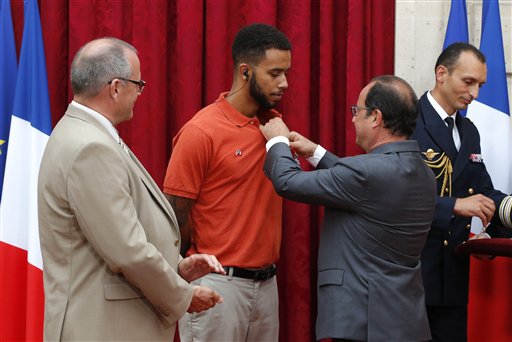 (Heavy.com) — They were supposed to be on a fun vacation, but the three men had no idea what was awaiting them. Anthony Sadler was one of three Americans who stopped a terrorist attack on a train in Belgium. The train was headed from Amsterdam to Paris. Sadler, a college student, Alek Skarlatos, a member of the Oregon National Guard, and Spencer Stone, who is in the Air Force, were the Americans who saved hundreds from possibly being massacred. According to French reporters, British man Chris Norman also helped stop the attack. Stone was injured, along with two other passengers on the train.

Here’s what you need to know.

Sadler has been celebrated as a hero in French news reports. He, Skarlatos, and Norman are pictured by numerous sources receiving bravery medals from the local mayor for their roles in stopping a terrorist attack on a high-speed train in Belgium, Thalys 9364. Stone also stopped the attack, but because he was injured subduing the gunman, he’s not seen in the photos.