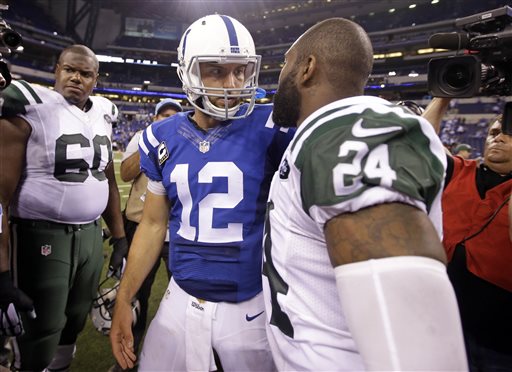 (SB Nation) – So here we are, an eighth of the 2015 NFL season in the books, and as of now the Jacksonville Jaguars are in first place in the AFC South. The Colts meanwhile, following their embarrassing 20-7 home loss Monday night to the Jets, are 0-2 and bringing up the division’s rear.

There are myriad reasons why the team every expert selected to win the division, and many had eventually representing the AFC in the Super Bowl, has yet to win a game. The offensive line doesn’t look like it could block a high school pass rush right. The defense is thin and depleted, always a bad combination. The play makers aren’t making plays.

There’s also the small matter of the Colts coughing the ball up eight times in two games.

“My play, turning the ball over, fumbles, interceptions, it’s a pretty glaring issue,” Andrew Luck said after the game when asked why the Colts are 0-2. “You don’t want to take anything away from what the Jets did on defense, but we continually shoot ourselves in the foot with penalties and turnovers. If we don’t clean those up, it’s hard to win.”

Jets Trying to Stay Grounded After 20-7 Win at Indianapolis