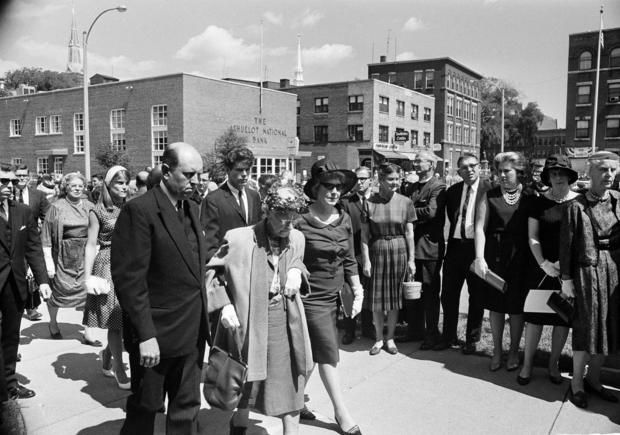 In this Aug. 24, 1965, file photo, Connie Daniels, right, mother of Jonathan Daniels, the young seminarian and civil rights worker slain in Hayneville, Ala., arrives at a church in Keene, N.H., to attend her son’s funeral. She is accompanied by Etta Weaver, center, maternal grandmother, of Bradford, Vt., and funeral director Frank J. Foley. Fifty years after Daniels’ death, the people who stood with him that day in Alabama look at deaths in Ferguson, Mo., Baltimore and Charleston, S.C., and lament the country’s persistent racial divide. (AP Photo/Bill Chaplis, File)

KEENE, New Hampshire (AP) — Fifty years after Jonathan Daniels was shot dead by an ardent segregationist in the southern state of Alabama, the people who stood with him then lament today’s killings of African-Americans by police and the racially motivated slaying of nine black worshippers as stark reminders of the country’s persistent racial divide.

Daniels, a 26-year-old white seminary student from New Hampshire had traveled to Alabama to register blacks to vote, a vital component of the civil rights movement. Tom Coleman, a white 54-year-old highway engineer infuriated by what he saw as liberal meddlers out to upset the racial order in his hometown, shot him in the chest.

Ruby Sales was a black 17-year-old secretary with the group called the Student Nonviolent Coordinating Committee who met Daniels. Sales wonders just how far the U.S. has come since Daniels died, seeing stories of blacks killed by police in Ferguson, Baltimore, New York and Cincinnati, along with the church shooting in Charleston, South Carolina.

“Race relations today in the United States are an extension of that time period,” she said. “Tom Coleman was able to kill Jonathan Daniels under the cover of the law. Despite the fact that it has been 50 years, we are still operating in a culture where police and vigilantes can murder African-Americans.”

In 1991, the Episcopal Church added Daniels to its roster of martyrs and celebrates his life on Aug. 14, the day of his arrest in Alabama. The Rt. Rev. Robert Hirschfeld, bishop of the Episcopal Church of New Hampshire, said Daniels’ work must be carried on today to combat the “unholy trinity” of racism, poverty and gun violence.

“Racial hatred is still very much alive, and the violence that results in it,” he said last month as he prepared to take a group of young people on a pilgrimage to historical civil rights locations in Alabama, including Hayneville, where Daniels was killed.

On Aug. 20, 1965, Daniels, Sales, the Rev. Richard Morrisroe and Joyce Bailey left the Lowndes County jail after spending six days locked up with 16 others following a protest. The four headed for Varner’s Cash Store a few blocks away for soft drinks while they waited for a ride.

When Daniels’ group got to the store, they were met at the door by Coleman, a 12-gauge shotgun in his hands. Coleman told them the store was closed. When Daniels asked whether he was threatening the group, Coleman fired.

Daniels pushed Sales out of the way and was hit in the chest, dying instantly. Coleman pulled the trigger again, hitting Morrisroe in the back and side as the priest tried to escape with Bailey. Morrisroe was severely wounded.

After a three-day trial, a jury of 12 white men took one hour and 31 minutes to acquit Coleman. Reaction was blistering. Elected officials, including Alabama’s attorney general, decried the trial as a sham, the verdict a travesty. Editorial pages in newspapers northern and southern excoriated Lowndes County as a bastion of entrenched racism.

Coleman, who had said that the churchmen had weapons and that he had killed them in self-defense, told CBS News a year later he had no regrets. The civil rights workers denied that the men were armed, no weapons were found, and at trial, defense witnesses gave changing accounts.

“They were down here promoting, antagonizing things, promoting trouble,” Coleman said. “I wouldn’t change a bit. If the same thing happens in the morning that happened that day, I would shoot them both tomorrow.”

Morrisroe, who named a son Jonathan, said it’s crucial for people to interact with people from different backgrounds, just as Daniels did by immersing himself in black Alabama.

“People have to break out of their ethnic shells,” Morrisroe said. “I think too much activity is across picket lines where there is no communication, but rather an attitude of fear and shouting, attitudes that often generate hate rather than any sort of breakthrough.”