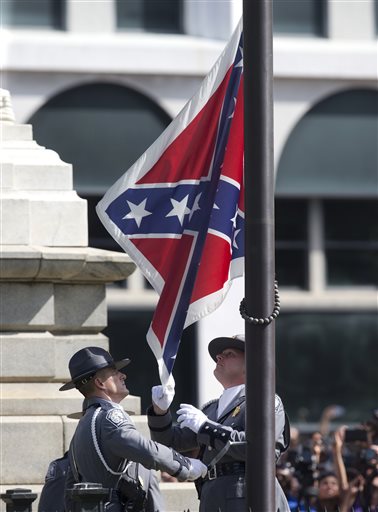 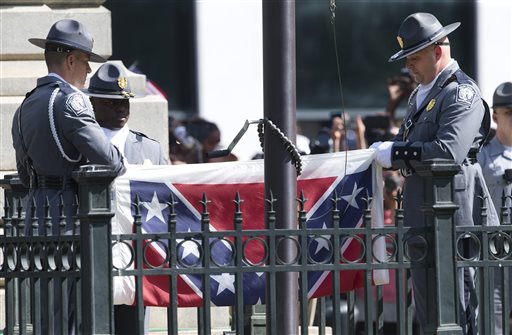 COLUMBIA, S.C. (AP) — The Confederate flag was lowered from the grounds of the South Carolina Statehouse to the cheers of thousands on Friday, ending its 54-year presence there and marking a stunning political reversal in a state where many thought the rebel banner would fly indefinitely.

The turnabout seemed unthinkable before the June 17 massacre of nine black parishioners — including a state senator — at a Charleston church during a Bible study. Dylann Roof, a white man who was photographed with the Confederate flag, is charged in the shooting deaths, and authorities have called the killings a hate crime.

The massacre reignited calls to remove Confederate flags and symbols across the South and around the nation.

The crowd chanted “USA” and “hey, hey, hey, goodbye” as the flag was swiftly lowered by an honor guard of South Carolina troopers during a 6-minute ceremony. Gov. Nikki Haley stood on the Statehouse steps and while she didn’t speak, she nodded and smiled in the direction of the crowd after someone shouted: “Thank you governor.”

Haley supported the flag before the shooting, but the Republican had a change of heart in the days after the killings, urging legislators to pass a bill she could sign bringing the flag down before the end of the summer.

As she looked on, two troopers rolled the flag and tied it up with a string. They handed it to a black trooper who brought it to the Statehouse steps. When the trooper handed it to a state archivist, the governor clapped.

President Barack Obama tweeted minutes after the flag was down, saying it was “a sign of good will and healing and a meaningful step towards a better future.” Obama delivered a eulogy at the funeral for state Sen. Clementa Pinckney, who was also pastor of the church where the killings took place.

A van was to take the flag to the nearby Confederate Relic Room and Military Museum. There, it eventually will be housed in a multimillion-dollar shrine lawmakers promised to build as part of a deal to get a bill passed removing the flag.

South Carolina’s leaders first flew the battle flag over the Statehouse dome in 1961 to mark the 100th anniversary of the Civil War. It remained there to represent official opposition to the civil rights movement.

Decades later, mass protests against the flag by those who said it was a symbol of racism and white supremacy led to a compromise in 2000 with lawmakers who insisted that it symbolized Southern heritage and states’ rights. The two sides came to an agreement to move the flag from the dome to a 30-foot pole next to a Confederate monument in front of the Statehouse.

Many thought it would stay there. Now, even that flagpole will be torn down. No timetable was set on that.

People who supported removing the flag chanted “take it down” before the ceremony and vastly outnumbered those who were upset about the move.

The flag came down 23 days after the massacre at Charleston’s Emanuel African Methodist Episcopal Church. Haley signed the bill with 13 pens. Nine of them went to the families of the victims.

On Friday, artist Ernest Lee came to the Statehouse with a framed portrait of all nine victims. He said he’s been invited to the Charleston church on Sunday to present his artwork. He said he wished more people would turn to art for inspiration.

“If they did, there wouldn’t be so much hate and violence,” he said.