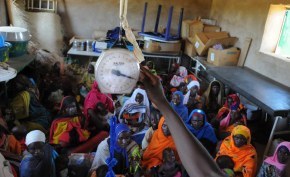 Women watch as their children are being weighed at MSF’s Ambulant Therapeutic Feeding Center in Chad.

Child undernutrition costs African nations up to 16.5 per cent of their gross domestic product (GDP), according to a series of reports looking at social and economic consequences of child undernourishment in 12 African countries.

The first reports from the Cost of Hunger in Africa study of 12 countries estimate that Egypt has 1.9 per cent cut from its GDP because not all of its children get enough to eat, while Uganda loses 5.6 per cent and Ethiopia a staggering 16.5 per cent.

The three reports were launched in the respective countries in June, and a study on Swaziland is due to be published later this month or in August.

“Work is in progress in Burkina Faso, Ghana, Malawi and Rwanda. Botswana, Cameroon, Kenya and Mauritania will follow,” Rachel Quint, a consultant at the UN’s World Food Programme and a member of the Cost of Hunger in Africa regional team in Addis Ababa, Ethiopia, tells SciDev.Net.

Egypt Military Retains ‘Protector of the State’ Image Despite Faults