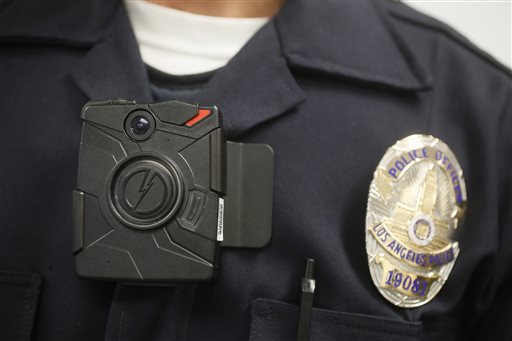 In this Jan. 15, 2014 file photo a Los Angeles Police officer wears an on-body camera during a demonstration in Los Angeles. The Los Angeles Police Departments effort to equip officers with body cameras has run up against an unlikely obstacle, the ACLU of Southern California. (AP Photo/Damian Dovarganes, File)

LOS ANGELES (AP) — The Los Angeles Police Department’s effort to equip officers with body cameras has run up against an unlikely obstacle — the ACLU of Southern California.

The civil liberties organization sent a letter Thursday to the U.S. Justice Department urging it to deny funding for the cameras until the LAPD revamps its camera policy, which the ACLU said is seriously flawed.

“I was surprised, because I think it’s sour grapes,” Los Angeles Police Commission President Steve Soboroff said about the opposition.

The independent civilian oversight board approved the department’s camera policy in April despite opposition from civil libertarians and from Robert Saltzman, a lawyer and the longest-serving member of the commission.

The policy allows officers to review video of incidents before speaking to investigators but says nothing about releasing video to the public, though LAPD Chief Charlie Beck has indicated in public comments that those videos would generally not be released.

The LAPD policy appears to provide some discretion for department investigators to block officers from viewing their videos in certain rare and unspecified cases.

“By withholding video from the public, requiring officers to review video before making statements in use of force and misconduct investigations, and failing to include protections against the use of body-worn cameras as general surveillance tools, LAPD’s policy provides no transparency and threatens to taint the integrity of investigations and undermine the public trust,” Peter Bibring, director of police practices and senior staff attorney at the ACLU, wrote in the letter.

The LAPD plans to provide 7,000 officers with body cameras in the next few years and this week began its rollout of 860 cameras paid for by private donors.

It’s the nation’s largest law enforcement agency to move forward with such an ambitious and expansive body camera plan. Soboroff said the department hopes to receive about $1 million from the federal government, which would help pay for about 700 cameras.

The letter urges the Justice Department’s Bureau of Justice Assistance to consider the policies of departments before providing grant funding for cameras.

The ACLU initially supported the LAPD effort to acquire body cameras but now says the policy does more harm than good. The group also said the LAPD’s process for developing the policy did not include meaningful public input.

The Police Executive Research Forum put forward national guidelines for policies with the U.S. Department of Justice last year that called for including details on release of video to the public. The guidelines also said decisions against releasing videos should be judicious to demonstrate transparency and openness.

The guidelines allow officers to review their video before making a statement.

Soboroff said the current policy is “written in pencil, not etched in marble” and it may be tweaked according to real-world needs.

“If we don’t get (federal funding) we’re still going to do it,” Soboroff said. “So that money is going to come from the taxpayer instead.”

Here’s How Donald Trump Responded to My Essay About Him