A Fathers Reflection: One on One with Tracy Martin, Father of Slain Florida Teen Trayvon Martin
Advertisement 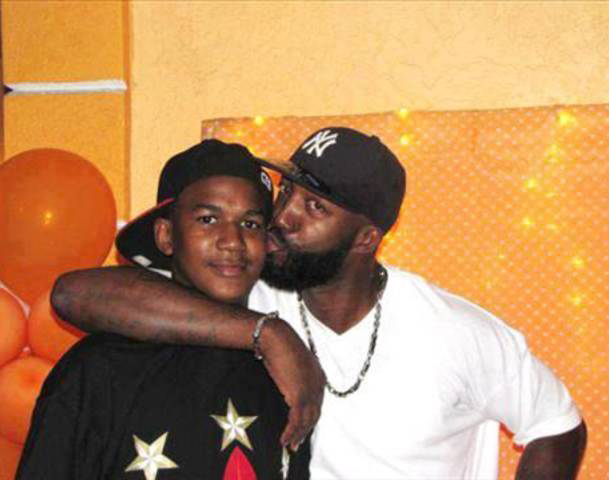 The trial of George Zimmerman, neighborhood watchman to himself, but reckless vigilante to others, began on June 10 for his killing of Black teenager Trayvon Martin on February 26, 2012 in Sanford, Florida.  In this one-on-one interview with Sister Charlene Muhammad, Mr. Martin opened up about his family’s personal battle, missing Trayvon on Father’s Day, and what the Justice for Trayvon Martin movement means to him.

Charlene Muhammad (LAWT):  How are you and Ms. Sybrina (Fulton, Trayvon’s mother) and your family doing because you’ve been thrust into this role, this battle and have been carrying it for some time and now the trial is on? Trayvon Martin (left) sharing a moment with his father, Tracy.

Tracy Martin (TM):  Spiritually, we’re doing fine.  Mentally we’re doing fine as well.  But physically, it’s taken a toll on us but at the same time, we just stay in the grace of God and we just be hopeful that this fight for justice is worth it all.

LAWT:  Are you ready for this trial?

TM:  You can’t prepare yourself for a situation such as this because you never know what the outcome will be.  You never know what’s going to be brought out.  I can say that I’m ready to take on any blows that the defense tries to hit me with and the reason I say I’m ready is because I prepared Trayvon for 17 years, so I know what type of person he was.  I know what type of kid he was.  So, whatever the defense has to say about him, I know that it’s not true.  I know there’s nothing that can knock me down because I know Trayvon.  True enough, they may say some things about using marijuana or he had pictures with guns or whatever but I didn’t know that Trayvon.  I just don’t feel that will have an effect on me.  Just sitting up listening to those things can have its wear and tear on you.  And the only thing I can try to stand on is my faith. I’ll just keep that strong hold on my faith and I will let good outweigh the bad.

LAWT:  There’s a renewed activism – and I don’t think the people ever went away, so to speak – but what are your thoughts about the people raising their voices again, keeping watch on this trial, and mobilizing around National Hoodie Day, which they’re using to fight for your son and other youth suffering the same thing?

TM:        I think anytime we continue to raise awareness, not only for Trayvon, but for other young Black and Brown children, and continue to let this society know that it’s not okay to kill our children and you get a slap on the wrist for it, we definitely have to stand strong and continue that fight.  And just to see so many people still active in raising that awareness and keeping America conscious as to what’s going on is very important because we all know that if we don’t raise a voice for our children, no one else will.  And as soon as we stop speaking up, they’ll assume that it’s okay to depreciate the value of our children’s lives.  So I think it’s very important that we continue to raise awareness, and it’s not only about Trayvon. It’s definitely about our children, our future.  By being thrust into this situation, you hate that it’s your child. But at the end of the day, you say to yourself, maybe this was something that had to happen and maybe we were the right people to pick because we were so outspoken about his death that we were standing there from the beginning saying, ‘No! You killed my son and something has to be done about this.’

So many times our children are killed and we don’t speak up about it.  And I was once asked, well, what if it had been an African American person that killed Trayvon.  My reply was I’d be pursuing this the same way.  So many times, when it’s Black-on-Black crime, we really don’t pursue it in that manner.  If you value your child’s life, you want to see your child’s killer brought to justice no matter if he’s Black, White, Brown, because we feel we were robbed. We feel that we were wronged so our fight from the onset was we need justice. We need equal justice.

LAWT:  I can almost hear that question coming.  I understand what you’re saying.  As this Fathers’ Day occurs within a week of the trial starting, what kind of impact is that having on you?  Does it matter that it’s Fathers’ Day or could it be any day?

TM:  Any day is tough living without him.  Father’s Day, you know, I always looked for the lil’ gift that he gave me. Whether it was the same gift every year, but I looked forward to that gift. He would go and buy me a pack of t-shirts or a pack of socks or some slacks, house shoes, whatever.  But I knew that I had that gift coming from him every year and with Father’s Day approaching, I know I’m not going to get that gift this year, but I still visit.  I’ll go visit him at the cemetery, sit down and have my talk with him.  The impact of him not being around on that day is devastating but at the same time, I know he’s looking down on us and looking at the fight that we’re putting up for him and the voices that we’re maintaining for him…Father’s Day is a tough day without him.

LAWT:   How are you dealing with attempts to paint your son in media in a negative light, with guns and drugs?

TM:  The defense attorney wants to put in the potential jury’s mind that Trayvon was this bad kid that was on heavy drugs and he was all off into guns and my thing is he was 17 years old.  He had just turned 17. If he was that bad of a kid, why wasn’t he ever in any trouble with the law? … Of course he did get suspended from school but that didn’t make him a bad kid. If you take a poll on high school students, I guarantee you 65-70% of the high school students have tried marijuana.  The gun thing, I don’t have guns in my household I can’t say yeah Trayvon had a gun and I knew about it because I didn’t know that Trayvon.  I didn’t know about Trayvon with a gun.  The pictures that they released, those were the first time I saw those pictures.  And I’m sure every parent in this country can’t tell you what their child does when they’re away from home or what their daily activities are because we’re not around our kids 24 hours a day.  So if your child does something while he’s not around you, you can’t speak on it.  All we can do is be hopeful that the things we instilled in our children will outweigh temptation.

LAWT:  How is the Justice for Trayvon Martin Foundation (http://www.justicetm.org) coming along?

TM:  We’re still getting it together.  It takes a lot of work. You can organize a foundation but to get it up and running and to have it successful, It takes a lot of work.  We just designed a new website.  Our mission for the foundation is to advocate, educate, have mentoring and offer some type of scholarship for children.  Our biggest thing is we’re not segregating.  We’re saying our foundation is open to anyone. It’s coming along.  It’s an uphill battle, uphill climb but we have faith in ourselves and the people we surround ourselves with so we think we can actually get to the next level with the foundation.