A Call to Action in Mississippi Horse Trainer's Death
Advertisement 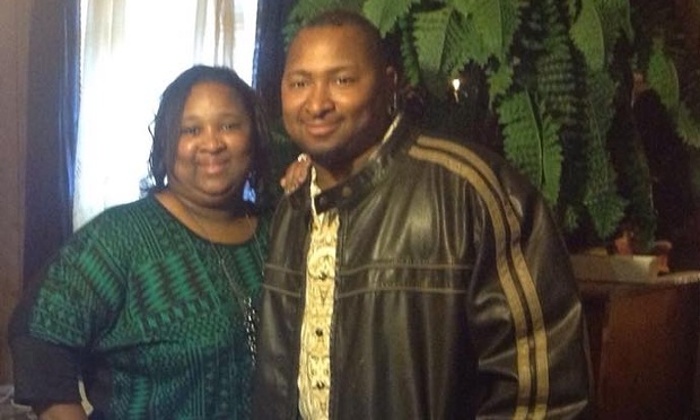 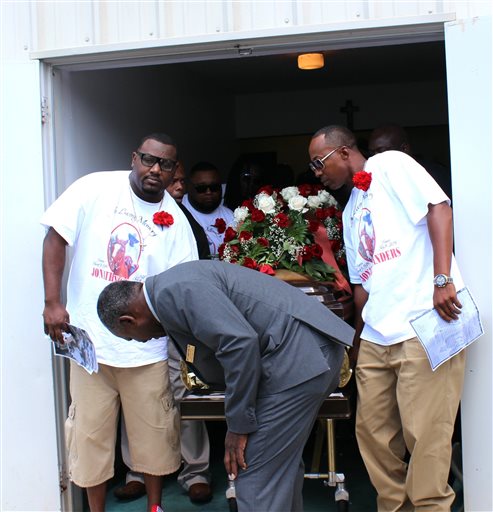 Pallbearers bring out the casket containing the body of Stonewall, Miss., resident Jonathan Sanders following his funeral services Saturday, July 18, 2015, at the Family Life Center in Quitman, Miss. Sanders, who had been driving a horse and buggy died after a fight with a Stonewall police officer. (Jeff Byrd/The Meridan Star via AP)

STONEWALL, Miss. (AP) — Hundreds of people gathered Sunday night at a baseball park in a small Mississippi town to remember a black man who died after a physical encounter with a white police officer and to call for action.

The crowd repeatedly shouted “No justice, no peace!” Lawrence Kirskey, president of the Clarke County NAACP, suggested they boycott local businesses because of lack of action in the death of 39-year-old Jonathan Sanders.

Sanders died after crossing paths with part-time Stonewall police officer Kevin Herrington, 25, late July 8. Sanders had been riding in a two-wheeled buggy pulled by a horse.

What happened that night is intensely disputed, and is being investigated by the FBI and the Mississippi Bureau of Investigation.

Lawyers for Sanders’ family and for witnesses say Herrington attacked without provocation after the two saw each other at a convenience store a mile across town. C.J. Lawrence, who represents three witnesses, said Sanders was doing nothing illegal and didn’t resist while Herrington choked him to death.

But Herrington’s attorney, Bill Ready Jr., said Sanders had what appeared to be illegal drugs and grabbed the officer’s gun during a struggle.

Neither Sanders’ mother nor his sister spoke at the rally. But Kayla Clark and Charita Kennedy, the mothers of Sanders’ 9-month-old son and 1-year-old daughter, thanked the crowd and asked town residents to keep supporting the family.

About 200 people from this town of 1,100 near the Alabama line attended the rally, avoiding the dozens of fire ant hills that dotted the park. Another 100 or so joined from parking lots across the street or after parking on neighborhood streets, and marched about a mile to the police station.

Herrington is on unpaid leave and left town on a family trip, Ready said. Sanders’ survivors buried him Saturday.

Authorities are asking for calm while they finish investigating. But there were already two protests last weekend.

Attorneys for Sanders’ family paint his death as part of a larger nationwide struggle over police brutality against black men, and they see it as part of the unfinished civil rights movement in Stonewall, a town named after Confederate general Stonewall Jackson.

Chokwe Antar Lumumba, the Sanders family lawyer, said authorities told relatives that an autopsy found he died from “manual asphyxiation” — strangulation. He said the manner of death was homicide, not accidental.

The autopsy finding doesn’t necessarily mean Herrington committed a crime and accounts so far leave unanswered questions: What triggered the encounter? Was Herrington using necessary force, or was Sanders the victim of an overly aggressive officer?

And at a time when police departments are under intense scrutiny for treatment of black suspects, did race play a factor?

Stonewall doesn’t have cameras in police cars or on officers, putting the focus on witnesses. Clarke County Sheriff Todd Kemp said one witness is Rachel Williams, a jail guard in neighboring Lauderdale County.

Lawrence, the witnesses’ attorney and Lumumba’s law partner, won’t confirm her name, or describe the others, except to say they are related and also distantly related to Sanders by marriage. Lawrence said the witnesses sought lawyers because they fear for their safety.

Also present at the time of the death was Herrington’s wife, Kasey Herrington, who was riding that night in his police car.

The lawyers for the witnesses relayed their accounts to The Associated Press but said they did not want to talk directly with reporters: The witnesses say Herrington drove up behind Sanders and flashed his blue lights, making the horse rear. Sanders fell off the buggy and chased the horse, while Herrington ran up and grabbed Sanders by the strap of a headlamp he was wearing that had fallen around his neck. They say Sanders fell to the ground in a fetal position, trying to relieve pressure on his neck but otherwise not resisting, while Herrington lay atop him and put him in a chokehold.

The attorneys said one witness went outside and pleaded with Herrington to release Sanders. He refused until his wife retrieved his gun. Then Herrington directed his wife to radio for backup. When Herrington finally released Sanders, witnesses say he was unconscious, with blood coming out of his mouth.

Ready, on the other hand, said a struggle began after Herrington found Sanders with drugs and Sanders tried to run.

“It is my understanding that Mr. Sanders fought back and actually grabbed the officer’s gun,” Ready said.

He also said that Sanders outweighed Herrington, making it hard for the officer to subdue Sanders. He said Herrington did not intend to harm or kill Sanders.

“This was just an unfortunate result of an encounter between him and Mr. Sanders,” Ready said.

State investigators have so far only described what happened as a physical “altercation.”

Lawrence said his witnesses deny Herrington found drugs, or that Sanders grabbed the officer’s gun. He and Lumumba say Kasey Herrington retrieved the gun from her husband’s holster while he restrained Sanders.

Sanders has a history of drug troubles. He was convicted in December 2003 for selling cocaine and went to prison until May 2007. He was arrested again in April for allegedly possessing cocaine. A lawyer who was representing Sanders said authorities were trying to seize his Chevy Tahoe and some cash. Ready noted that if Sanders had drugs, his bond on the earlier charge could have been revoked and he would have had to stay in jail until the charges were resolved.

Herrington has been described as both an excellent police officer and a “Rambo” who held a grudge.

He graduated from a police academy in nearby Meridian in December 2013. Until last week, he was working occasional shifts in Stonewall and two nights a week in neighboring Enterprise. Ready said he also has a full time job as industrial worker, but wouldn’t be more specific.

Enterprise Police Chief Joey Moulds said Herrington is a conscientious officer who kept on good terms with people — even after he’d written them citations.

Moulds said there were few complaints about Herrington and said he was very non-confrontational.

“I would have to put him at the top of the list. He’s the most humble person I know of, extremely humble, extremely responsible,” Moulds said.

But Eddie Crosby, who lives near Enterprise, thinks otherwise. Crosby said Herrington pulled him over multiple times this year to the point where Crosby felt Herrington was harassing him. He wrote a complaint to Moulds and the mayor and complained in a letter published in April by a local newspaper. He didn’t include Herrington’s name — describing the officer only as a “Rambo” type — but confirms he was referring to Herrington.

Afterward, Crosby said Herrington would flash his police lights at him and recently ticketed him for rolling through a stop sign.

“If he got it in for you he was going to have you,” Crosby said. “I could understand the first time but you just don’t stop somebody and make up an excuse.”

Friends of Sanders describe him as a horse-lover who made a living buying, training and selling the animals. He lived next to his mother on a wooded side-road. Clifton Follins, the neighbor, said Sanders’s two children didn’t live with him but frequently visited.

“Ever since he’s been big enough, he loved those horses,” said Follins, 69.

AP Photographer Rogelio Solis contributed to this report.
Copyright 2015 The Associated Press. All rights reserved. This material may not be published, broadcast, rewritten or redistributed.