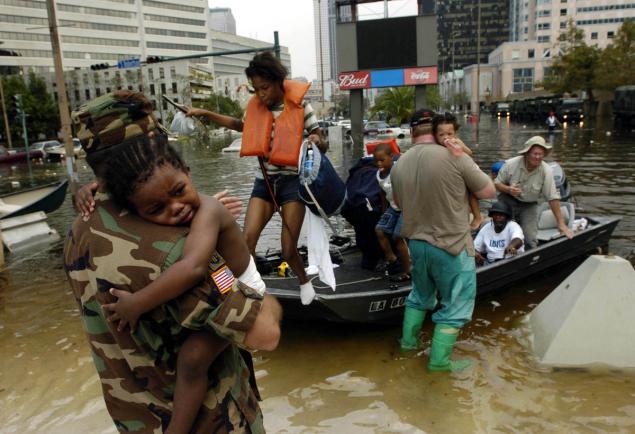 National Guard member Sgt. Ricky Wheelington (left) holds Tyrone Allen, 2, as he arrives for shelter at the Louisiana Superdome in New Orleans in the aftermath of Hurricane Katrina. Around 26,000 people took shelter in the Superdome as the hurricane made landfall. (Melissa Phillip/AP Photo)

NEW ORLEANS (New York Times) — It is a wonder that any of it is here at all: The scattered faithful gathering into Beulah Land Baptist Church on a Sunday morning in the Lower Ninth Ward. The men on stoops in Mid-City swapping gossip in the August dusk. The brass band in Tremé, the lawyers in Lakeview, the new homeowners in Pontchartrain Park.

On Aug. 29, 2005, it all seemed lost. Four-fifths of the city lay submerged as residents frantically signaled for help from their rooftops and thousands were stranded at the Superdome, a congregation of the desperate and poor. From the moment the storm surge of Hurricane Katrina dismantled a fatally defective levee system, New Orleans became a global symbol of American dysfunction and government negligence. At every level and in every duty, from engineering to social policy to basic logistics, there were revelations of malfunction and failure before, during, and after Katrina.

Ten years later, it is not exactly right to say that New Orleans is back. The city did not return, not as it was.

It is, first of all, without the more than 1,400 people who died here, and the thousands who are now making their lives someplace else. As of 2013, there were nearly 100,000 fewer black residents than in 2000, their absences falling equally across income levels. The white population decreased by about 11,000, but it is wealthier.