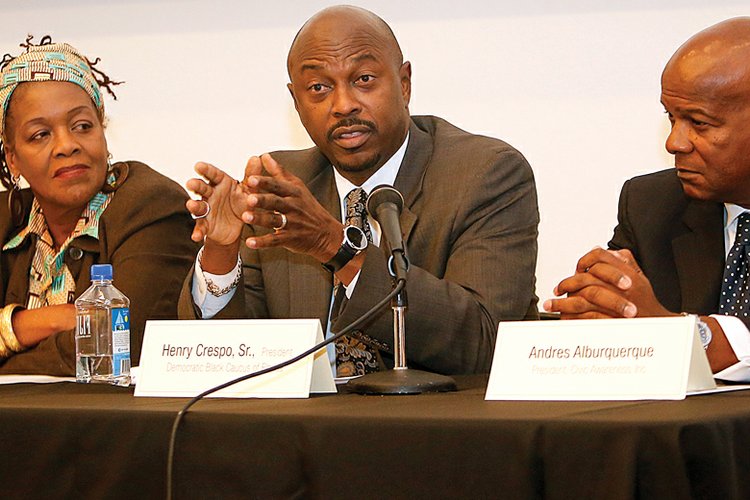 From left, Dr. Carole Boyce-Davies, Henry Crespo and Andres Alburquerque are three of the panelists at Saturday’s Village Dialogue: “An invitation from the Afro-Cuban Community” by the Black Affairs Advisory Board. (David I. Muir/Miami Times)

by Carolyn Guniss
Special to the NNPA from The Miami Times

The buzzwords at “A Village Dialogue: An Invitation from the Afro-Cuban Community” discussion are working together.

The spirit of Cubans and Blacks working together comes to the forefront now that last month President Barack Obama decided to open up communications between the United States and Cuba.

At the same time, panelists agreed that being Black should not be the thing that binds Blacks in America.

“Skin color alone is not enough to bind a people together. We need to find cultural ties. We have to find ways to make that happen,” said Dr. Marvin Dunn, who authored “Black Miami in the Twentieth Century.”

The panelists shared stories of how people view them as either Black or not Black, Cuban or not Cuban.

Hernandez said she was told she was Cuban all her life but realized there was a difference when her brother tried to date white Cubans and none of the white Cuban boys asked her out. Then when she tried to make friends with Blacks, they told her she wasn’t Black.

They agreed, however, that they share the same struggles as Black Americans.

In 1997, Crespo presented himself as a Black Cuban to fill a vacant Miami Commission seat.

He thought he could fill two slots but he was rejected.

In 2015, the Miami commission is majority Hispanic, with one Black and one white seated.

Today, Crespo is the president of the Democratic Black Caucus of Florida.

One attendee thought the dialogue needed to extend to Blacks from the Caribbean and other Latin American countries – not just Cuba. Nicole Gérgoire, who attends Florida International University, said she came to the presentation because she is conducting research on the African Diaspora in the United States.

She said she was very interested in the panel and the topic of the discussion, but was disappointed that two things haven’t been addressed at all.

“First, I think the panel should be [open] to the entire Black community in Miami, not only to Afro-Cubans and African-Americans. There are also Africans and other Caribbean people,” said Gérgoire. “I think everyone should be around the table. Second, something was announced but was not addressed, the ‘Black Lives Matter’ movement and the questions about black unity and black solidarity should have been addressed, I think, a bit more during the discussion, but maybe time was missing.”

Cubans are used to living with Blacks, though they treat them different based on skin tones, said attendees and people during a video-documentary.

Cuba’s population as of July 2014 is about 11 million people. From 2012 estimates the population includes 64 percent whites, 26 percent mulattos or people of mixed races and a little more than 9 percent Black.

A DVD entitled “Underground Cuba,” showed numerous Blacks in Cuba talking about being marginalized, stopped often to show identification and even ridiculed if or when a white Cuban wanted to date them. A Black woman in the video said that Black women were at the bottom of the food chain; another complained how Black woman are sexualized; and still another said Black women aren’t encouraged to learn skills.

The barrios of Blacks are markedly poorer and many complain of no work or opportunities.

The discussion was an eye-opener for Miami-Dade District 7 Commissioner Xavier L. Suarez.

“The insights I have heard here have been absolutely stunning to me,” Suarez said. “We need to do more to get the government, the corporations, the media and the nonprofits involved.”

What Conflict? No Room for Palestinians in Israeli Election