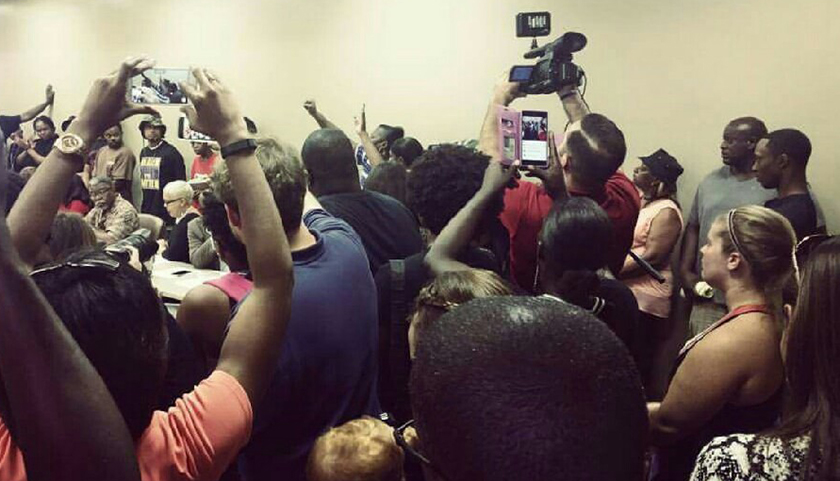 BATON ROUGE — As shootings continue to plague cities across the country, frustrated citizens are continuing their fight for justice. With each shooting, dashcam and other forms of surveillance footage have been released to ensure complete disclosure. Unfortunately, that hasn’t been the case with the deadly shooting of Alton Sterling in Baton Rouge.

After nearly three months, only the cell phone videos filmed by spectators have been released. In addition to the withholding of dashcam footage and other surveillance videos, Baton Rouge police officers Blane Salamoni and Howie Lake II are still on administrative leave. No charges have been brought against the officers and citizens are wondering why.

Now, citizens and protesters are demanding answers. Monday, Sept. 26 was declared #BlackOutBR, a day where local citizens wore black clothes and did not work, go to college, or shop. A rally was held at the steps of City Hall calling for information on the Alton Sterling case. After the rally, protesters entered a police reform meeting to hear the committee’s plans and to demand answers and action.

“What happens when leaders and protesters disrupt a meeting on police reform? Things get uncomfortable, they get real, and then they get a seat at the table, alongside the chief of police, the DA, & the DOJ,” wrote artist Walter Geno McLaughlin on Facebook.

More than 30 protesters lined the walls of the small meeting room, including Sterling’s aunts.

“We want to press upon our local government but also go all the way to feds that we want a decision on the investigation, said Dunn who explained the reason for the gathering and expressed protesters’ demands.

“This issue of Alton Sterling has been divested from the people in this room as much as we hate to hear that,” said Will Jorden, who is an assistant district attorney and prosecutor. “We hear the frustration. I am frustrated. These pastors are frustrated. But what this [committee] does is give the people a sense of legitimacy and to be able to move forward with positive change.”

Wicker said that the group wasn’t charged with coming up with solutions.

“That’s not our job. That’s not what we are doing here,” said Wicker. “Our charge is to setup an infrastructure so that what you are saying can actually be heard, documented and put into a policy paper that will be submitted as the voice of the community.”

Protesters presented a list of demands which included a request for changes t be made to city and state flood contracts. The change to contracts would require the cancellation of current contracts in order to include Black-owned firms in renegotiations. The third demand is in reference to police reform. With incidents of alleged injustices resolved with internal investigations, community leaders and local citizens adamantly believe there needs to be a task force in place on state and local law enforcement levels to reform police departments across the city and state.

The Drum is a member publication of the National Newspaper Publishers Association. Learn more about becoming a member at http://www.nnpa.org.